Letters of ‘intention to deport’ on course to double

Just shy of 3,300 people granted asylum protection in Republic over the last 10 years 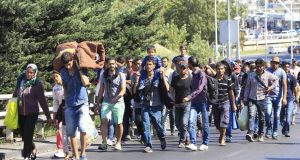 Migrants in search of asylum. A person can be granted “permission to remain” in the Republic for several reasons, such as on humanitarian grounds. File photograph: Reuters

The number of deportation letters issued by the Department of Justice looks likely to rise dramatically this year. Meanwhile, “permission to remain” reprieves for asylum seekers have fallen.

In the first five months of this year, the Department of Justice has issued “intention to deport” letters to 1,451 people residing in the Republic. In all of 2016, 1,752 deportation letters were issued.

Of the 1,451 deportation letters issued, 409 were sent to people in the asylum system.

A spokesman from the department said an intention to deport letter “is the the start of a process whereby detailed consideration is given to each case. A decision is made at the end of this process either to make a deportation order or grant permission to remain”.

A person can be granted “permission to remain” in the State for several reasons, such as humanitarian grounds or connection to the State.

Lucky Khambule of the Movement of Asylum Seekers in Ireland (Masi) said the rise in deportation proceedings was “alarming”.

Mr Khambule said recent reforms of the asylum system under the new International Protection Act (2015) has led to increased deportations.

The new law, which streamlined the application process for asylum seekers to reduce waiting times for decisions, also increased the State’s powers to enforce deportation orders.

Just 3,285 asylum seekers have been granted official asylum protection in Ireland in the past 10 years, according to figures from the department.

Since 2007 23,506 people have applied for asylum status in Ireland, and the average rate of refusal is 86 per cent.

In 2010, 96 per cent of applications for asylum status were declined by the Irish immigration office and 160 people were granted asylum from 3,732 cases.

Labour Senator and former minister of State at the department Aodhán Ó’Ríordáin claimed the department is afraid of creating a “pull factor” and incentivising more refugees to apply to Ireland for protection.

“Fundamentally, they want less numbers applying. The message going out is if you’re looking for asylum here, it’s not going to be easy. I don’t think our asylum process is anything to be proud of,” said Mr O’Ríordáin.

The department said there is no official policy to limit the amount of applicants granted asylum. “It would be illegal to impose any targets or quotas and Ireland has never done so,” said a spokesman.