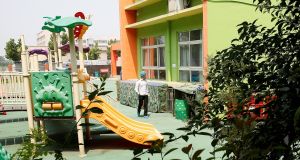 An investigator at the scene on Friday of an explosion outside a kindergarten in rural Fengxian county in China . Photograph: Aly Song/Reuters

Police are calling an explosion outside a kindergarten in eastern China which killed eight and injured dozens “a criminal act” and have preliminarily identified a suspect or suspects linked to the blast, the state-run People’s Daily said.

The paper said two people were killed immediately in the blast at Chuangxin kindergarten in rural Fengxian county, while another five died soon after following unsuccessful efforts to revive them.

An eighth person later died from their injuries, police in the local government in Xuhou said on its Weibo social media account. The explosion also wounded 65 people, eight of whom sustained serious injuries.

There have been several attacks in recent years on kindergartens, often revenge assaults by disgruntled employees. Security is tight around all schools, with guards and barriers. Parents are given special passes and visitors generally have to sign in.

There was no indication yet whether the investigation was targeting one or more suspects, and the names of the dead have also not been released, though no children or teachers are said to be among them.

Witnesses told local media the explosion happened at a stall where hawkers were selling deep-fried snacks, and may have been caused by the mishandling of gas canisters. Investigators have not said whether they have identified the cause of the explosion.

One fishmonger working near the school told the Caixin news site that she first heard a loud explosion before 5pm and saw a ball of fire near the kindergarten.

After she rushed to the scene, she saw dozens of parents and children lying in pools of blood in front of the kindergarten. Video footage online purportedly from the scene seemed to confirm this report, although there were also several videos later shown to be fake that went viral after the blast.

She said most children and parents were inside the facility when the blast happened.

Of the 65 injured, most were being treated in local hospitals while several of the critically injured have been taken to intensive care facilities at hospitals in Xuzhou.

Seven victims, including both adults and children, were listed as being in critical conditions, and they were being treated at the Affiliated Hospital of Xuzhou Medical University, a doctor working at the hospital’s intensive care unit told Caixin.