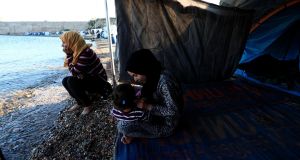 Souda camp: the rocky beach in front of the camp on the Greek island of Chios is a sea of tents, full of new arrivals for whom it has no room. Photograph: Zohra Bensemra/Reuters

Looking towards the shimmering blue of the Aegean Sea, and with Turkey’s Cesme peninsula filling the horizon, Ilyas shares the story of his odyssey to the Greek island of Chios.

After escaping the war in Syria, the 17-year-old teenager spent four months in Turkey alone, trying three or four times to make the perilous voyage. “I paid one smuggler $1,500, but the trip fell through, and I didn’t get the money back,” he says with the help of an interpreter. “Then I borrowed money for another smuggler, and now I have a huge debt there.”

Although Ilyas, who uses an assumed name to protect his identity as a minor, is happy to have made it to Europe, he is now trapped on a Greek island less than 10km across the narrow strait from Turkey – and, like thousands of others, is becoming increasingly frustrated.

Under the March 2016 deal between Brussels and Istanbul, the European Union declared Turkey a “safe third country”, meaning people claiming asylum in Europe can be returned there, even if they have come from Syria or other war-torn countries.

People are still legally entitled to claim asylum in Greece, although they must prove that they are in danger of persecution in Turkey.

In part because of the huge numbers of claims Greece now has to process – in 2016, 51,092 people claimed asylum in Greece, compared with 13,195 in 2015 – returns under the EU-Turkey deal are much slower than expected, as is relocation of refugees to European Union countries, another facet of the deal. With every decision about the movement of people mired in red tape, even the legal requirement to move vulnerable people off the islands to the mainland – mainly families, children and young people travelling alone – is bureaucratic and slow.

What are conditions like in his shanty town of metal cabins in the moat of an old castle? Ilyas, wearing a spotless white T-shirt that defies the dust and dirt of camp life, shrugs. “Not great.”

It’s a huge understatement. Both camps on the island – Souda, the waterfront camp where Ilyas lives, and Vial, a former factory that Human Rights Watch has criticised for being overcrowded, unsafe and unhygienic – are full beyond capacity. The rocky beach to the fore of Souda is also a sea of white tents, full of new arrivals for whom the camp has no room.

More than 3,000 people are being housed on Chios, and in total there are about 14,000 stranded refugees and migrants on the five Aegean islands of Chios, Samos, Lesvos, Kos and Leros. Hot-spot camps once used for registration before people continued with their journeys have become de-facto detention centres.

The results of this are violence, unrest and a huge increase in mental-health problems among refugees who have no desire to stay in Greece, or indeed be returned to Turkey.

On Chios, right-wing extremists have attacked people in camps as they slept; in March, a recent Syrian arrival to Chios self-immolated, and violence has frequently broken out among ethnic groups housed in the squalid conditions of Vial with nothing to do.

The trauma people are experiencing because of the EU’s policy of containing refugees in Greece is unacceptable, says Dr Declan Barry, a paediatrician who is medical co-ordinator with Médecins sans Frontières in Greece.

In response to the EU-Turkey deal the charity rejected all funding from European Union governments, including Ireland, to voice its protest at a policy it says is aimed at border control.

The hope that was propelling people forward is gone. They had a goal, but now that they can’t move on the trauma they experienced at home and en route is surfacing

Barry has seen first-hand how people’s needs have changed since March 2016. “The hope that was propelling people forward is gone. They had a goal, but now that they can’t move on the trauma they experienced at home and en route is surfacing. The mental-health problems we are seeing are a lot more severe. We are seeing cases of bed-wetting, selective mutism in children . . . People are living in a pressure cooker. The adults are not coping, and this is affecting the children. Children are very resilient, but they need to be in safe space to tap into their problems, and they do not have that.”

The suffering being inflicted on people is unacceptable, Barry says. “There is a very high level of suffering. That this is happening in a European country is inexcusable, but it is very easy to ignore, because it’s contained to the Greek islands.”

The UN Refugee Agency says that in 2016 more than 100,000 children arrived in Greece, Italy, Bulgaria and Spain, of whom more than 33,800 were unaccompanied and separated. Of some 62,000 migrants currently stranded in Greece, about 21,300 are children, and among those at least 2,000 are estimated to be unaccompanied.

Although unaccompanied children are entitled to special protection under Greek law, the system is hugely under-resourced and cannot cope with the complex challenges of adequately caring for them.

Half of the estimated 2,000 unaccompanied minors in Greece are waiting for a shelter placement away from the dangers of the camps

Half of the estimated 2,000 unaccompanied minors in Greece are waiting for a shelter placement away from the dangers of the camps – or indeed the threat of being placed in “protective custody” in police stations, as 56 young people in Greece were at the end of April. More still who are not officially counted live on the streets and survive through prostitution.

For the lucky ones, the 54 shelters across the islands and mainland, mostly provided by NGOs, step up to fill a yawning gap in the system by providing safe homes and services for young people.

One of the funders of a number of shelters is the Greek Bodossaki Foundation. It funds shelters in Athens to offer appropriate accommodation to young people on the move. It also supports a foster-family programme under which Greek families provide temporary homes to unaccompanied children who are in the process of relocation or family reunification.

One such shelter sits on a leafy residential street in Athens behind heavy embossed doors in a building that once housed a primary school. The building was refurbished with the help of a construction firm that donated its services, and now more than 20 teenagers have a home.

Since March 2016 young people lucky enough to get a shelter space are staying there longer, because with the borders closed it’s a choice between that or the streets.

“Most young people we see do not want to stay in Greece and are desperate to leave. But relocation and family reunification are very slow,” says Andrez Dimou of Praksis, which runs shelters for unaccompanied and separated children.

“We have young people from Pakistan, Syria, Algeria, Iraq, Mali and Afghanistan. They have access to social workers, psychologists, interpreters and lawyers. We try to create a sense of home here, to teach them life skills and to integrate them.”

As well as fleeing war, many young people are coming to Greece for economic reasons.

If you have a young person coming from rural Pakistan who has no running water, electricity or access to education, how can I say he should not be allowed to stay?

“They want a better life. But if you have a young person coming from rural Pakistan who has no running water, electricity or access to education, and who does not qualify for asylum, on a human level how can I say he should not be allowed to stay?”

But even seemingly clear-cut cases are difficult to process, especially when children are involved.

Faiz, a 17-year-old Afghan, has lived in camps and shelters in Greece for a year despite having a brother in Belgium to reunify with. His brother recently travelled to Greece for a DNA test, but there is still no word on how long his case will take to be processed. “It is disappointing and frustrating,” Faiz says.

Dimou says that young people’s frustration with the system can see them disengage with services only to fall into criminality or worse. There have been reports of young people selling organs on the black market to make money to survive. “We do see success stories,” Dimou says. “But there are many lost cases too.”