Austria’s political wunderkind gets ready for his close-up 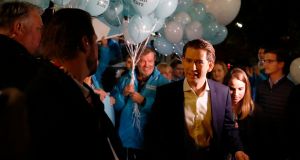 At Vienna’s Stadthalle concert hall, a capacity crowd of 16,000 claps their hands to the jaunty Radetzky March.

Then he appears: a messiah in a slim-fit suit, with greased-back hair and jug-like ears.

Watching this Viennese spectacular – Riefenstahl does Eurovision – the thought occurs that Leo Varadkar will this weekend hand over his crown as Europe’s youngest leader to Austria’s shooting star: Sebastian Kurz.

Just 31, the Vienna native entered politics aged 16, dropped his law studies to become Europe and integration minister aged 26 and, since 2013, has served as foreign minister.

Today he is completely at ease as cameras in the Vienna hall film him from all angles, including from a wire zipping above. In a control room, 10 people sit before a mixing desk and screens choosing images for the big screens in the hall and the television broadcast.

Kurz offers himself as the solution to Austrians who are heartily tired of their political establishment. Back “Team Kurz”, he says, and join his political “movement” for change. Whether in merchandise or emails, it’s all about Sebastian: poster boy for the post-ideological era of personalised politics.

The echoes of Emmanuel Macron’s victorious En Marche!! movement are intentional. Except for a crucial detail: unlike former economy minister Macron, Kurz did not give up his job and go out on his own to found a new party outside existing political structures.

He is a cabinet minister in Austria’s grand coalition and head of the centre-right People’s Party (ÖVP). This conservative party has been in power for all but 17 years in Austria’s post-war era – and continuously for the last 30 years.

But in the legislative election campaign Kurz has kept the problem brand well hidden, clipped the wings of powerful regional party leaders and pulled in non-career politicians from all walks of life – from businesswomen to wheelchair-using athletes.

The sense of momentum is palpable but, behind the scenes, the Kurz show is run by an army of experienced diplomats and ÖVP political veterans. So is his “movement” really new, or just old Austrian wine in a young, slim bottle?

“We won’t even know that on election day, [but rather] in a few years at the earliest,” says Prof Peter Filzmaier, political scientist at the Danube University in Krems. “Kurz needs a very clear victory and success in government as chancellor, only then will his party accept further reforms and allow him choose senior personnel.”

Onstage in Vienna, nothing is left to chance. Everyone speaks in scripted soundbites: regional politicians, teenage volunteers, even the 11-year-old Nicolaus Evian, in the hall because he told Kurz during his road trip that he wanted to be chancellor one day, too.

“I like that Sebastian always had a clear position in the refugee crisis, even if it was unpopular,” says young Nicolaus, sounding remarkably precocious for an 11-year-old.

The 2015-16 refugee crisis, in which Austria was on the frontlines, was Sebastian Kurz’s golden hour. As foreign minister he negotiated with his southwestern neighbours to close the so-called “Balkan Route”.

“We remained steadfast when half of Europe was shouting at us,” says Kurz onstage, in a nod to Brussels and Berlin, as the crowd cheers in support. “We want to keep our borders secure so we decide who comes into our country, not human traffickers.”

In a snappy speech he runs through reform promises for Austria: a new debt brake; a law to end pre-budget giveaways; more powers for the chancellor. He attracts the biggest applause for promises to cut the tax burden and cut welfare for asylum seekers and refugees.

Such tough talk has seen Kurz sail past his Social Democrat (SPÖ) senior coalition partners, who are tied in knots over dirty tricks allegations against him. He has even supplanted the far-right populist Freedom Party (FPÖ), by stealing its clothes through immigrant-critical policy and social media soundbites.

In a recent Facebook post, for instance, Kurz wrote of concerned Vienna citizens who had told him they were considering moving “because they feel like strangers in their own lane”.

Vienna mayor Michael Häupl, of the Social Democrats, said he had “never heard such nonsense”, while Lutheran archbishop Michael Bünker has warned politicians about using refugees as “scapegoats” for electoral gain.

After beating the FPÖ on its own immigration turf, it is likely that Kurz will offer the populist party the role of junior partner in office. Such an alliance is unlikely to prompt a repeat of the EU’s sanctions against Vienna’s ÖVP-FPÖ coalition in 2000. The mood has changed since then: with public opinion – in Austria and across the enlarged EU – hardening against immigrants, Islamist extremism, and even against the EU itself.

And when Austria assumes the EU’s rotating presidency next year, its chancellor will have an influential role in shaping the looming immigration and asylum debate.

“Kurz is without doubt someone who sees the EU in almost all issues as part of the solution and not the problem,” says Filzmaier. “He will try to push his positions in the EU without shying away from conflict, but will not act against the EU itself.”

In the last days of campaigning, Kurz polarises like few others. One camp sees him as Austria’s best hope to reform the dusty status quo, a 21st-century wunderkind in the mould of Metternich, imperial Austria’s wily diplomat-in-chief. But critics see him as a populist opportunist in a hurry, happy to extract maximum support through just enough xenophobic dog-whistles.

Show over in Vienna, an army of teenage Kurz lookalikes – open shirts, jackets and greased-back hair – spill out on to the street armed with goodie bags, free ice-cream and food and drink.

“We like Sebastian because he doesn’t just talk, he acts,” says Andreas (18), from Salzburg. “The critics are just jealous, or opposed to the change we need.”

But not everyone is impressed.

Christian (25), from Vienna, finishes off a schnitzel bread roll and admits he only came for the food. “Kurz has people eating out of his hand by selling himself as not part of the system, although he clearly is,” he says. “Kurz has the look that Austrians like, it communicates ‘success’ to them.”

An undecided attendee is Walter Krug from the Steiermark. The pensioner knows a thing or two about celebrity politicians: decades ago in the army he was the superior of a young man called Arnold Schwarzenegger.

Krug says the bodybuilder-filmstar-politician learned a lot by marrying into the Kennedy family. But Sebastian Kurz is different.

How? Aura, says Krug, with a satisfied lick of a blue ice-cream cone.

“He sells himself as part-virgin, part-messiah, come to save people tired of politics,” he says. “It’s a hugely popular strategy but, if he fails to deliver, the damage to democracy will be huge.”