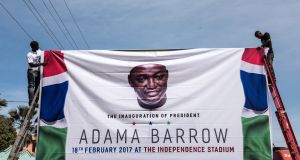 Men hang a banner for the inauguration ceremony of Gambian president Adama Barrow prior to his return in Banjul, Gambia. Photograph: Andrew Renneisen/Getty Images

Mr Barrow, a former estate agent, won a December 1st election but Mr Jammeh refused to step down, forcing his opponent to be inaugurated at the Gambian Embassy in neighbouring Senegal.

Clad in a long white African tunic, Mr Barrow smiled as he stepped out of a small plane and walked down a red carpet to greet hundreds of diplomats and officials lined up to greet him. Immediately afterwards, fighter jets from the West African Ecowas regional force passed overhead.

Mr Barrow’s surprise ballot box victory and the determination of Western and African countries to uphold it is being celebrated as a moment of democratic hope for Africa.

Yet, diplomats say tiny Gambia was an easy target and that regional armies are unlikely to venture into bigger countries to oust authoritarian rulers with more powerful allies than Mr Jammeh.

Regional leaders helped thrash out a deal last Saturday for Mr Jammeh to fly to exile in Equatorial Guinea as thousands of Ecowas troops closed in after 22 years of increasingly repressive rule in Gambia, marked by alleged torture and killings of opponents.

Mr Jammeh’s political demise is a relief to many people in the small, sliver-like west African country and the UN’s Mr Chambas promised assistance in investigating human rights abuses.

Swiss police detained longtime former Gambian interior minister Ousman Sonko near the Swiss capital of Berne on Thursday after a complaint filed against him by non-governmental organisation Trial International.

In the weeks following Mr Jammeh’s decision to reject the election outcome in early December, Mr Barrow was seen as vulnerable and was protected by unarmed volunteers until he relocated to Dakar.

During his absence, he was unable to return home for his son’s funeral after a dog attack.

He has asked the 7,000-strong west African military contingent to remain in Gambia for another six months, Mr Chambas said on Thursday. An Ecowas official said they were studying the proposal.

Gambia, a tiny riverine nation surrounded by western ally Senegal on three sides, has a bloated army for its size but so far there have been no signs of resistance to Ecowas forces.

However, lingering questions remain as to the loyalty of the Republican Guard, thought to number about 400, who in the past protected Mr Jammeh from coup attempts.

The whereabouts of members of alleged assassination squads known in Gambia as the “Junglers” were not known.