Thailand’s Grand Mosque is located in Pattani in the south of the country, where thousands have been killed in a separatist insurgency that erupted in 2004. Photograph: Bazuki Muhammad/Reuters

Buddhist monks collecting alms on their morning rounds are protected by armed Thai soldiers in Pattani. Monks, teachers and other seen as symbols of the Thai state have been the targets of insurgents since 2004. Photograph: Jason South/Fairfax Media/Getty Images

The aftermath of a deadly car bomb blast outside of a hotel in Pattani last August 24th. Photograph: Tuwaedaniya Meringing/AFP/Getty Images

Outside the Grand Mosque in Pattani, the largest in Thailand, white-veiled adolescents congregate, waiting for one of the motorised trishaws that ferry residents around the town of 120,000.

Many of the men here wear prayer caps and sport beards. It is a reminder of how Pattani – capital city of a province of the same name – feels culturally closer to the Malaysian capital of Kuala Lumpur than the Thai capital of Bangkok.

A pronounced military presence can be seen on the highways that link Pattani with Yala and Narathiwat, Thailand’s two other majority Muslim provinces. This is not surprising, given the region’s separatist violence, which has killed thousands. Although technically there is no curfew, the town falls silent soon after dark.

The violence has a vicious, unpredictable and random quality. The campaign to create an Islamic Pattani Darrusalam encompassing Thailand’s four southernmost provinces, goes back decades. But the latest phase of the insurgency, carried out by rural guerrillas known locally as juwae (“warriors”), began in 2004.

In response, Bangkok has deployed more than 60,000 troops in the region. They are easily spotted at the rural checkpoints as vehicles pass corrugated iron huts and zig-zagging walls of barbed wire. Bored young soldiers peer into vehicles, check papers and wave drivers on. Armoured cars and tents are even positioned near Pattani’s main bus stand.

Death of the king

It is still possible to spot large illuminated billboards of the former king, Bhumibol Adulyadej, who died in October at the age of 88. His oldest son, Maha Vajiralongkorn, was crowned last month.

“We believe in Allah but we respected the king,” says Wahid Hafiz, a local student of Islamic studies, “I can speak Arabic, but I’m a Thai.”

Thailand has experienced 12 military coups since the nation became a constitutional monarchy in 1932, the latest in May 2014. The current junta calls itself the National Council for Peace and Order and is led by a retired general, Prayut Chan-o-cha.

Through his advisory body, the late king obliquely criticised the government’s handling of the separatist rebellion in the southern region, home to two million people, more than a decade ago. The impact of his loss is hard to predict. 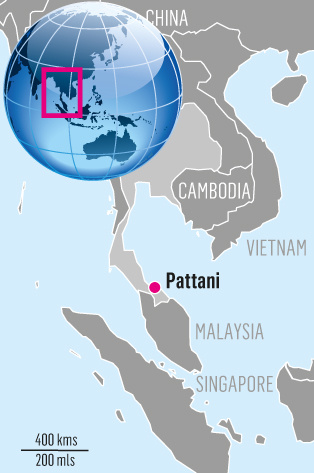 His son is an unpopular figure with much of the public. Maha Vajiralongkorn has been divorced three times and cut ties with four of his children. He is known to be friends with the exiled opposition leader, telecommunications tycoon Thaksin Shinawatra, who was prime minister for five years before being removed by the military in 2006.

The Anglo-Siamese Treaty of 1909 established the present-day border with Muslim-majority Malaysia. Bangkok’s rule was tenuous in the early days, the Siamese kings tolerating Islamic customs in lieu of Thai civil law. But after the 1930s, the process of “Thai-ification” began, aimed at creating a cohesive sense of national identity by homogenising social and cultural practices.

Inevitably, this alienated southern Muslims. By the late 1950s, a political independence campaign was displaced by an armed insurgency. The most significant juwae group at the moment, the Co-ordinated National Revolutionary Front, known by its Malay title, the Barisan Revolusi Nasional Co-ordinasi (BRN-C), is thought to have several thousand members.

According to Worasret Charoenpol, a colonel in the Royal Thai Army, the BRN-C does not hold territory in the countryside, but is lightly armed and mobile.

“The BRN-C operate in small teams,” he says. “The ordinary members don’t meet the leaders, and they concentrate on random attacks for which they don’t need big weapons.”

The BRN-C is not part of recent talks between the government and an umbrella organisation of separatist groups called Mara-Pattani.

Duncan McCargo of Leeds University, author of three books on the conflict, says that the military junta is the obstacle to substantive peace talks. “Nothing will happen until an elected government returns. Current peace talks are a bogus attempt to smoke out militant leaders – and everyone knows it.”

There is certainly little affinity for the junta in the south. On August 7th, Muslim voters there rejected a new junta-backed constitution in a nationwide referendum. Many were concerned by one section that seemed to place Buddhism above other religions. Moreover, the new constitution has made Thailand’s armed forces largely immune from prosecution.

The junta promises elections in late 2017. But the possible return of Thaksin Shinawatra or his populist and rural-based Pheu Thai Party may not be relished in the south. During the periods of civilian rule, local Buddhists have tended to favour the right-wing, royalist Democrat Party.

For their part, local Muslims remember the brutality with which Thaksin’s 2001-2006 administration reacted to the first insurgent attacks, which took place in mid-2004.

Even in larger southern cities such as Hat Yai or Songkhla, there is a noticeably pronounced security presence in shopping malls, markets and around hotels. However, the southeast Asian exponents of radical jihadism who have established a presence in neighbouring Indonesia and the Philippines have little influence over Thai Muslims.

However, “the military have literally no idea what the insurgents plan to do”, says McCargo. “This is a dynamic conflict which can move in different directions at any time.”

Nevertheless, following failed talks just before the king’s death, a fresh round of talks took place in Malaysia. More recent talks in December have floated the notion of southern “safety zones”, where a ceasefire could be implemented. However, the BRC-N has rejected this.

Last year, attacks took place outside the Muslim south; on August 11th and 12th a string of bomb blasts north of the conflict zone killed four and injured 36, including western tourists. Blame was attributed to southern insurgents and is hardly encouraging given that the Thai government hopes raise some €50 billion in tourist revenue this year.

For now, the portraits of the old monarch remain in place as the white-veiled young women file out of Pattani’s Grand Mosque. But these are relics of the past – and uncertain times are on the way

2:23 Irish Times poll: Majority would be happy to see new housing nearby

3 Why does the small TUV party frighten the DUP so much?