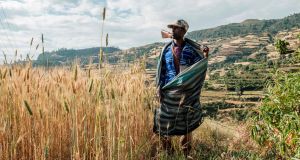 Zeleke Alabachew, farmer and militia fighter, near the village of Tekeldengy, northwest of Gondar, Ethiopia. Photograph: Eduardo Soteras/AFP via Getty

Ethiopia’s prime minister Abiy Ahmed replaced his army chief, the head of intelligence and the foreign minister on Sunday as the military continued a five-day-old offensive in the restive Tigray region with a new round of air strikes.

Mr Abiy gave no reasons for the personnel changes, which come as he pursues a military campaign against the Tigray People’s Liberation Front (TPLF), a powerful ethnic faction that led the ruling coalition for decades until he took office in 2018.

The president of the Tigray region, Debretsion Gebremichael, who is also chairman of TPLF, said that TPLF would keep on defending itself until federal authorities agree to negotiate.

Mr Abiy’s office announced that deputy prime minister Demeke Mekonnen had been appointed foreign minister, while deputy army chief Birhanu Jula was promoted to army chief of staff. Temesgen Tiruneh, who was president of the Amhara region, was named new intelligence chief. Amhara regional state forces have been fighting alongside their federal counterparts against the TPLF.

Mr Debretsion said the federal government was still pounding some targets with air strikes. “Federal control is zero within Tigray,” he said.

The federal government did not immediately respond to a request for comment on Mr Debretsion’s remarks.

Ethiopia’s neighbours fear the fighting could spark a civil war in Africa’s second most populous nation and destabilise the Horn of Africa region.

On Sunday, the central bank ordered the closure of 616 branches of commercial banks in Tigray, citing reports of looting.

Tigrayans dominated Ethiopian politics for decades until Mr Abiy reorganised the ruling coalition into a single party which the TPLF refused to join.

Tensions escalated after Tigray held a regional election in September, which the federal government called illegal. On Wednesday, Mr Abiy launched military operations in Tigray in response to what he said was an attack on federal troops.

Nine million people risk displacement from the escalating conflict in Tigray, the United Nations said in a report published on Saturday, warning that the fighting was blocking food and other aid.

About 600,000 people in Tigray depend on food aid to survive, while a further million receive other forms of support, all of which are disrupted, the UN Office for the Coordination of Humanitarian Affairs said.

Clashes between federal troops and Tigrayan forces had broken out in eight locations in the region, according to the report.

Pope Francis expressed concern about the conflict in his weekly address from the Vatican on Sunday.

“I am following with concern the news from Ethiopia. While calling on the temptation of armed conflict to be cast aside, I invite everyone to prayer and brotherly respect, to dialogue and peaceful reconciliation of discord,” he said.

An Ethiopian military plane bombed a missile and artillery site next to the airport in Tigray’s capital Mekelle on Sunday, one military and two diplomatic sources told Reuters. It was not immediately clear what was destroyed in the bombing.

The plane left a military base in the city of Bahir Dar in the neighbouring Amhara region, sources said.

The army was in control of several towns near the border including Dansha and Shire, new army chief Birhanu told a state-run newspaper on Sunday, without saying when the army seized the areas.

It is not possible to verify the report as communications systems in the Tigray region have been shut down since Wednesday.

Mr Abiy spoke on Saturday with UN secretary general Antonio Guterres, who “offered his good offices”, in the quest for a peaceful resolution of the crisis, the UN spokesman said. The UN chief also spoke with the African Union chief Moussa Faki Mahamat and Sudanese prime minister Abdalla Hamdok in his capacity as chair of the regional Africa group IGAD, the spokesman added. But Mr Abiy is not listening to requests for mediation, diplomats and security officials in the region have told Reuters. He did not issue a statement on the call with the UN chief. Instead, during his address on TV on Sunday, he called on the international community to “understand the persistent transgressions” by the “TPLF clique”. – Reuters