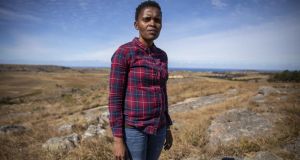 Anti-mining activist Nonhle Mbuthuma: “I am continuously getting calls from people saying that hit men are coming to get me, and as a result I am forced to sleep in different houses every night.” Photograph: Amnesty International

South Africa’s government has decided to appeal elements of a recent landmark court ruling that requires it to obtain the consent of a rural community before it can issue mining licenses in their area.

The ruling, delivered by Pretoria high court in late November, has thrown the South African mining sector into turmoil, with minister for mineral resources Gwede Mantashe saying if the full judgment stood there would be “chaos”.

The elements of the judgment that will be appealed concern the authority to issue mining licenses, according to Mantashe, and the status of the Mineral and Petroleum Resources Development Act, which makes the state the custodian of all mineral resources in South Africa.

In early December Mantashe told reporters that if the right to grant mining licenses was subject to the “full and informed consent” of the affected communities, as stated by the judges, then there would be “no mining” in South Africa in the future.

According to mining experts, South Africa’s 10 former homelands, which were established by the apartheid regime as communal areas where different tribes would reside, is where most new and expanding mining projects will be located.

However, the relationship between mining companies and indigenous communities in South Africa is often fraught, as in the past the companies paid scant regard to preserving the natural environment or ensuring local people benefited from their activities.

November’s ruling came after a decade-long court action taken by the Amadiba Crisis Committee on behalf of residents from five rural villages around Xolobeni in the Eastern Cape Province. They want to protect their traditional way of life – which revolves around subsistence farming and foraging – from the impact of mining.

The dispute pitted the coastal community against the government and Australian mining company Mineral Resource Commodities (MRC), which wanted to extract large quantities of titanium and zircon from the sand of unspoiled beaches that stretch along their ancestral lands.

The 10,000-member Xolobeni community has also been divided by the dispute into those who want the mining project to go ahead in the hope it will bring development and jobs, and those who say it threatens their way of life.

MRC has said the communities’ fears are unfounded, as only about one-tenth of the 3,000 hectares (1,200 acres) of land it requested permission to work on would be mined, and buffer zones would protect the most sensitive areas.

The standoff between the two sides of the community has descended into bloodshed in recent years.

According to anti-mining activist and Xolobeni resident Nonhle Mbuthuma, spokeswoman for the Amadiba Crisis Committee, three of her committee colleagues have been murdered so far for opposing the mining project.

The most high-profile murder to date was the killing of local taxi firm boss and Amadiba leader Sikhosiphi “Bazooka” Rhadebe, who was shot dead in 2016 in front of his teenage son shortly after telling Mbuthuma he had received information they were both on a hit list.

Many other villagers who opposed the mining have also been attacked, forcing people to flee their homes and sleep in nearby forests for weeks on end. MRC has denied any involvement in the bloodshed and intimidation, and has condemned it.

Mbuthuma (41) told The Irish Times that she thought November’s high court ruling would afford her and other anti-mining activists some protection, but she maintains the death threats have kept coming despite the judgment.

“I am continuously getting calls from people saying that hit men are coming to get me, and as a result I am forced to sleep in different houses every night. I also leave my cell phone turned off for long periods so my whereabouts cannot be tracked,” she said.

Despite the high court ruling, the Eastern Cape’s member of the executive council for economic development and tourism, Oscar Mabuyane, recently called for a referendum to be held in the area in a bid to circumvent the judges’ decision.

“The politicians do not want to respect the ruling of the court because of their own personal interests. They do not respect the rights of the people who live here,” said Mbuthuma.

To drive home their position, earlier this month Xolonbeni community leaders issued a statement saying they did not want mining in their area for the next 15 years, although they expressed doubt as to whether the government would listen to them.

“We have the right to say no, and we instead expect a visit from the departments of agriculture and of tourism,” their statement said.