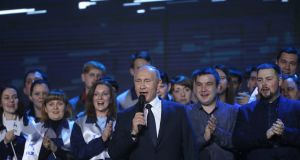 Russian president Vladimir Putin. He has accused the US of seeking an excuse to build more missiles. “What will be the response from our side? Very simple. We will do the same.” Photograph: Getty Images

A discovery in the archives of East Germany’s Stasi secret police made a fitting story for the end of a year that stirred memories of the Cold War. It was an identity card belonging to Vladimir Putin, who was a KGB officer in Dresden and worked closely with the feared Stasi until 1989, when the fall of the Berlin Wall drove him back to the dying Soviet Union and a new life in politics.

It is nearly 30 years since the collapse of Europe’s communist regimes, and almost two decades since Boris Yeltsin chose Putin to succeed him as president of the poor, chaotic and embittered mess that was Russia in 1999.

Yet 2018 carried echoes of even more distant days as Russia poisoned a double agent in Britain, sparred with the US over a new arms race and old missile-reduction treaties, and angered its own people by trying to censor culture and control how they communicate.

In March, two undercover officers from Russian military intelligence (GRU) arrived in Salisbury, for what they would claim was a visit to its famous cathedral. In fact, they went there to murder Sergei Skripal, a former GRU officer who betrayed some of the agency’s secrets after he was recruited by Britain in the 1990s.

Skripal and his daughter survived poisoning by the Russian nerve agent Novichok, which their attackers apparently applied to the door handle of his house; local woman Dawn Sturgess died in July, however, after spraying herself with the contents of what looked like a perfume bottle.

The subsequent expulsion by Britain and its allies of some 150 Russian diplomats – or intelligence officers posing as diplomats – dwarfed similar measures taken during the darkest days of the Cold War.

The unmasking of Salisbury “tourists” Anatoliy Chepiga and Alexander Mishkin triggered a slew of revelations about the GRU, blowing the cover of perhaps hundreds of its officers and showing that its security and spy craft were not keeping pace with the times.

The whole fiasco was an embarrassment for Putin, who has returned the security services to the elite status that they enjoyed in Soviet times, and he denied involvement in the Skripal case while praising the GRU’s “professionalism, courage and determination” at a celebration of its 100th anniversary last month.

“The potential for conflict in the world is growing,” he told GRU officers. “There are provocations and blatant lies, as well as attempts to upset the strategic balance.”

Russia feels it has restored some strategic balance by propping up Syrian dictator Bashar al-Assad and regaining influence in the Middle East, and by developing what Putin claims are new nuclear-capable missiles that can evade all US defences.

“I would like to tell those who have been trying to escalate the arms race for the past 15 years, to gain unilateral advantages over Russia, and to impose restrictions and sanctions...The attempt at curbing Russia has failed,” he said in March, a fortnight before being re-elected in a predictable landslide.

Insisting that his country had developed the rockets in response to Washington’s withdrawal in 2002 from a 1972 anti-ballistic missile treaty with Moscow, Putin added: “You didn’t listen to our country then. Listen to us now.”

Russia hoped that under Donald Trump the US would listen attentively to its views, after he advocated a rapprochement and spoke admiringly of Putin during his election campaign.

Warm words have not translated into deeds, however, and this month the US said it would withdraw from another Cold War treaty on intermediate-range nuclear forces unless Russia ended its alleged non-compliance within 60 days.

The 1987 accord bans deployment of ground-launched missiles with a range of 500km to 5,500km, and Washington and its Nato allies claim Russia has already deployed a new rocket which fits that description.

Putin accused the US of simply seeking an excuse to build more missiles. “What will be the response from our side?” he said. “Very simple: We will do the same.”

So as Europe prepares to mark the events of 1989 that hastened the end of the Cold War, it also faces the threat of a new arms race involving successors to the US Pershing and Soviet SS-20 missiles that were aimed at cities on either side of the Iron Curtain.

This is familiar terrain for Putin, whose worldview was formed by East-West hostility, as it is for men like White House national security adviser John Bolton and US defence secretary Jim Mattis.

Putin is less comfortable dealing with a generation that is not haunted by the Soviet collapse and the instability that followed, and ignores the propaganda peddled by state television.

Thousands of young Russians joined protests this year against corruption, a decision to raise the retirement age and the state’s clumsy attempt to block messaging app Telegram – which disrupted access to many other websites – after it refused to allow the security services to access users’ encrypted messages.

The sight of baton-wielding riot police dragging teenagers off to holding cells deepened the rift between many Russians and Putin’s security-obsessed state, which regards anything outside its control as suspicious and probably dangerous.

While Kremlin media portray Russia as an island of stability in a bewildering and hostile world, on the internet opposition leader Alexei Navalny – who was banned from running in the presidential elections – exposes the corruption of Putin and his allies in YouTube videos that are watched by millions.

The internet is also where outspoken Russian musicians enjoy the kind of freedom and exposure that they are denied on mainstream media.

As Putin loyalists last month accused young rappers of promoting everything from drugs to Satanism to an unpatriotic attitude, a club in the city of Krasnodar cancelled a concert by hip-hop star Husky over alleged “extremism” in his lyrics.

The gig was moved to another club where the power was quickly cut, prompting Husky to perform from the roof of a car parked outside – and to earn a 12-day prison term from the authorities.

Fellow musicians responded by arranging a protest concert in Moscow, which rapper Oxxxymiron dedicated to “artists who have faced this in the past...and artists who might face this in the future. This is about the freedom of society.”

Shaped by the Cold War, the KGB and the trauma of the Soviet empire’s collapse, Putin has other priorities.

When becoming Russia’s acting president 20 years ago he sought to stop its chaotic decline by ruthlessly reasserting Kremlin authority over the nation’s politics, economy and mass media.

In the past decade he has sent troops into Georgia and Ukraine to stymie their hopes of integration with the West, to whip up Russian patriotism and pride and to bring a few slivers of old Soviet territory back under de facto Kremlin control.

If he now has a vision for Russia’s future it appears to be a rehashed version of its past in which militarism, propaganda, censorship and state power prevail over freedom of expression, innovation, political competition and citizens’ rights.

This month he cut an incongruous figure in paying his respects to revered Russian human rights defender Lyudmila Alexeyeva, who died at the age of 91.

Putin offered flowers and condolences, but another man’s absence said more about Russia in 2018 and beyond. Lev Ponomaryov (77), another veteran activist, was unable to attend his old friend’s funeral – he was serving 16 days in jail for posting support for street protests on Facebook, and a Moscow court refused to let him out to say goodbye.