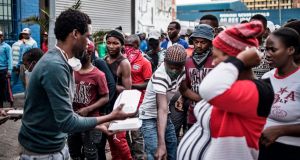 On April 21st a €25 billion social and economic package for South Africa was announced to counter the crippling effect the lockdown was having on businesses. Photograph: Marco Longari / AFP

The South African government’s decision to use a race-based empowerment policy to determine if tourism businesses qualify for coronavirus relief funding is to be challenged in the country’s highest court.

Trade union Solidarity confirmed on Tuesday it has launched a constitutional court appeal of a legal judgment that empowers the state to use companies’ compliance with black economic empowerment (BEE) policies to establish their eligibility for Covid-19 related financial aid.

On Saturday the Pretoria high court ruled that the department of tourism’s decision to consider struggling companies’ adherence to BEE codes of practice when assessing them for assistance was not unlawful.

BEE codes were introduced by the African National Congress (ANC)-led government in 2003 to address inequalities in South Africa’s economy that were entrenched by the white minority regime during the apartheid era.

Among other things, the BEE codes call on companies to increase the number of black shareholders and senior managers. However, some companies, especially smaller ones, remain non-BEE compliant.

On April 21st the president, Cyril Ramaphosa, announced a €25 billion social and economic package for South Africa to counter the crippling effect the lockdown, which began on March 26th, was having on businesses.

The package was widely welcomed for including a €10 million facility to aid struggling small and medium-sized enterprises (SMEs), many of which operate in tourism, which accounted for 8.2 per cent of South Africa’s GDP in 2018.

However, it has since transpired that facilities established to disperse the aid – the Business Growth Fund, the Youth Business Relief Fund and the Tourism Relief Fund – will at least partially be guided by the applicants’ compliance with the BEE codes.

Solidarity chief executive Dirk Hermann said that awarding help based on race to firms struggling because of the impact of Covid-19 was a bizarre approach.

“It is scary that there could be constitutional grounds in a crisis like this which allows the allocation of emergency funds to take place based on race,” Mr Herman said in a statement.

On Tuesday tourism minister Mmamoloko Kubayi-Ngubane hit back at critics of her department, saying “white compatriots” who were non-compliant with the BEE codes only had themselves to blame for their exclusion from the Tourism Relief Fund.

However, not everyone in government supports the approach to dispersing Covid-19-related financial aid.

On Monday finance minister Tito Mboweni told parliament, “we need to support all enterprises, black and white, as long as they are able to remain viable to support our people and create jobs”.