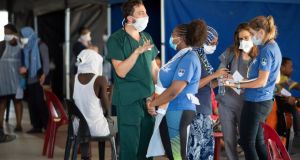 South Africa’s government is hoping to consolidate the progress it has made in slowing the spread of coronavirus during the recently imposed nationwide lockdown by extending the measure to the end of April.

On Thursday evening President Cyril Ramaphosa said his decision to prolong the period of mass isolation, which has put a huge strain on an already weak economy, was about avoiding a massive loss of life in the months ahead.

“Unless we take these difficult measures now, unless we hold to this course for a little longer, the coronavirus pandemic will engulf, and ultimately consume, our country,” Mr Ramaphosa warned in a televised address to the nation.

But the main opposition party, the Democratic Alliance (DA), said Mr Ramaphosa’s government was making a grave mistake by thinking only in terms of lives versus livelihoods, in dealing with the coronavirus outbreak.

During his Thursday address, Mr Ramaphosa maintained it was “too early to make a definite analysis” of the lockdown’s effect on the virus’s infection rate, but he said there was “sufficient evidence” to conclude it was working.

Ahead of the lockdown’s start in late March, people in South Africa were told by government and medical experts to expect a “tsunami” of continuous infections, akin to what many countries in Europe have faced in recent weeks.

But so far this nightmare scenario has failed to materialise, with the rate of new cases of Covid-19 slowing significantly.

While 1,170 cases there had been confirmed in South Africa by March 27th, this had increased to only 2,002 by April 10th. The confirmed death toll from the disease stands at 24.

Mr Ramaphosa said the pre-lockdown figures represented an average increase in daily Covid-19 cases of about 42 per cent for the period, but since the restrictions were implemented this had dropped to about 4 per cent.

“While we recognise the need to expand testing to gain a better picture of the infection rate, this represents real progress,” he said.

According to South Africa’s National Institute for Communicable Diseases, 73,028 tests for Covid-19 had been conducted by April 10th.

After an initial slow start to testing, the government recently mobilised 10,000 volunteers and 67 mobile testing vehicles to search for virus hotspot across the country.

It is hoped that up to 30,000 people a day will be tested in the weeks ahead, and this should provide a better picture of the disease’s real prevalence among a population of 57 million.