Minister for health ‘extremely concerned’ about public ‘letting their guard down’ 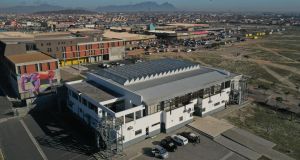 Khayelitsha Field Hospital is in a community sports centre in the township on the outskirts of Cape Town. Photograph: Médecins Sans Frontières

South Africans have been warned by the government’s health minister to prepare for a surge in coronavirus infections as he cited concerns that citizens were ignoring essential safety measures.

Zweli Mkhize urged the public to continue wearing masks and practise social distancing with South Africa facing into a crucial few months when virus infections are expected to peak.

“We are extremely concerned that fatigue seems to have set in, and South Africans are letting down their guard at a time when the spread of infection is surging,” Mkhize said on Sunday.

This week Covid-19 infections are expected to peak in the Western Cape province, the epicentre of the virus outbreak in South Africa.

As of Monday, the province accounted for just under 43 per cent of the 144,264 confirmed cases nationally, and 72 per cent of the 2,529 deaths currently attributable to the virus. In the last week South Africa has also seen record daily increases in infections nationally, with Sunday’s 6,344 new cases the highest yet in a 24-hour period.

The Western Cape expects to see an average of 60 deaths per day during the virus’s peak infection period, according to provincial officials.

However, Gauteng and the Eastern Cape have overtaken the Western Cape as the provinces with the most new daily infections, suggesting these heavily populated regions are next in line to face the full might of the pandemic.

While Gauteng, the country’s richest province, will be more able to handle a large rise in patient numbers and the increasing need for ICU beds, Eastern Cape hospitals are already said to be buckling under the strain due to poor preparation, management and corruption.

Since South Africa began to ease its lockdown restrictions in mid-May to breathe life into its hamstrung economy, and to allow its cash-strapped citizens earn a living, the country has been anticipating the worst.

All eyes are now on the Western Cape, which is seen as the best-prepared province, to see how its healthcare system copes when put to the test. The rest of the country is forecast to reach its peak infection period in late August or early September.

As part of the provincial government’s strategy to beef up healthcare, half a dozen temporary medical facilities were built to add an extra 1,428 beds for acutely ill patients to the 2,162 already available in the province.

One of these facilities, Khayelitsha Field Hospital, is housed in a community sports centre in the township on the outskirts of Cape Town. It will be operational for as long as it is needed, say officials.

Khayelitsha, home to an estimated 500,000 people, became the first township in South Africa to record a confirmed case in late March, and it has gone on to become one of the worst-affected communities in the country.

The 60-bed field hospital, which was built in three weeks by NGO Médecins Sans Frontières together with local authorities, has been admitting the overflow of moderate-to-severe Covid-19 patients from the nearby Khayelitsha District Hospital since June 2nd.

According to the field hospital’s clinical manager, Dr Celeste Jonker, there were 29 Covid-19 patients in the facility on June 23rd, but she maintained they were ready to operate at full capacity if needed.

“Most of our patients are elderly, female, have at least one co-morbidity and two-thirds suffer from hypertension or diabetes,” she said. Eleven patients had died up to that point , and 63 had recovered and been discharged.

The government is also using an extensive testing initiative in conjunction with a quarantine and isolation programme to try to flatten the curve of the epidemic.

Western Cape officials last week outlined how hospitality and government facilities as well as dozens of community halls had been adapted to accommodate infected individuals who are unable to self-isolate safely.

However, Western Cape health minister Nomafrench Mbombo warned that 70 per cent of those who should be availing of the programme refused to do so because of the stigma attached to infections.

“We will be going into the Covid-19 hot spots with community leaders and patients who have recovered from the disease to speak to the locals. We have to change their behaviour,” Mbombo said.

Western Cape premier Alan Winde said he hoped to see infections decline within a month of the peak in the province. But he warned the fight to defeat the disease would not end there.

“We will then have to start preparing for the next stage of this pandemic,” he said.

1 Health officials ‘very concerned’ about foreign travel, says Donnelly
2 Michelle O’Neill will not step aside ‘under any circumstances’ despite calls from other parties after Storey funeral
3 World, look away now – these are dark days for the United States
4 ‘Grossly irresponsible’- Waterford mayor condemns house party of 60 people
5 Bobby Storey: The IRA's planner and enforcer who stayed in the shadows
Real news has value SUBSCRIBE