Conflict in Tigray: ‘What we don’t know could be even more disturbing’ 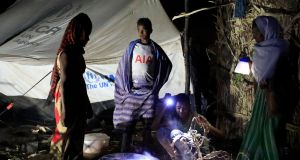 Ethiopian refugees who fled the Tigray conflict at a village next to Um Raquba refugee camp in Gedaref, eastern Sudan. Photograph: Ashraf Shazly/AFP via Getty

Nearly three months into the conflict in Tigray, northern Ethiopia, aid agencies are appealing for more access and international funding to help millions of civilians who are struggling in the middle of a grave humanitarian crisis.

“Since the start of the fighting, in early November, the population has been largely cut off from the outside world,” said Karline Kleijer, Médecins Sans Frontières emergency manager. “The banks are not operating, the mobile phone networks don’t work, there’s no internet any more. And, meanwhile, several armed groups are roaming around in the area.”

There is a huge food shortage because commercial food deliveries aren’t happening, farmers can’t harvest, and some crops were completely burned down or destroyed. Hospitals and clinics were looted, she said, as staff fled or were also trying to find food for their own families. “The population in Tigray, close to six million people, are really taking the brunt of this fighting,” Ms Kleijer said.

Ethiopia is Africa’s second most populous country. In 2018 Abiy Ahmed, an ethnic Oromo, took over as prime minister. This brought to an end decades of control by the Tigray minority.

Ethiopia’s national elections, which had been scheduled for August 2020, were postponed by a year due to the coronavirus pandemic.

In September, Tigray went ahead with its own elections, which the central government decried as illegitimate. Two months later Mr Abiy announced the military offensive against Tigray.

After the war began, communications – including phone lines and internet – were cut, making it almost impossible to get accurate information about what was happening. They remain down in most areas of Tigray.

This week Unicef said its staff are still struggling to assess the impact of the war.

“Our concern is that what we don’t know could be even more disturbing,” said the agency’s executive director, Henrietta Fore. “For 12 weeks the international humanitarian community has had very limited access to conflict-affected populations across most of Tigray.”

One assessment, carried out by a partner of Unicef, showed that as many as 70,000 children under the age of five in Shire, northern Tigray, were severely malnourished.

More than 57,000 civilians have fled across the border to eastern Sudan, including at least 300 unaccompanied children.

Tigray has long homed about 100,000 Eritrean refugees, who fled what is one of the world’s most secretive dictatorships, where young people are forced into indefinite national service.

A 2018 peace agreement between Ethiopia and Eritrea was one of the reasons Mr Abiy was awarded the Nobel Peace Prize the following year. Now it seems that both countries have united against the Tigrayans.

On Tuesday the US called for Eritrean forces to leave Tigray. In a statement, the state department cited evidence of Eritrean soldiers forcibly returning Eritrean refugees to Eritrea, as well as “credible reports of looting, sexual violence, assaults in refugee camps and other human rights abuses”.

“It remains unclear how many Eritrean soldiers are in Tigray, or precisely where,” the statement read.