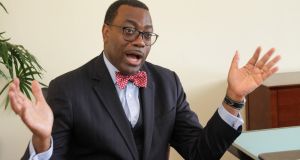 The University of Botswana is offering a special elective course on Brexit, calling it the UK’s “biggest crisis for a generation”.

Bruce Bennett, a senior lecturer at the university’s history department, who is organising the course, said the institution offered a regular course in British history. “We’d do a range of things while looking at what is relevant to colonial history. This year we are focusing on Brexit.”

Dr Bennett said there were aspects of Brexit that were of special interest to Botswana – a landlocked country in southern Africa, 9,000km from the UK, and a former British colony. Brexit was regularly discussed in Botswana’s newspapers, he said.

“There’s interest about the potential economic impacts... There is a lot of trade with Botswana. No one is really sure what it means.”

The academic said he was frequently approached by students with questions about Brexit, because of his background in British history. “‘What’s going on, can you explain this to me?’,” he said they ask. “I thought this is a one-off opportunity, let’s try this.”

Advert for a special elective course in Brexit at the University of Botswana. 'This course will have no final exam', appropriately enough. pic.twitter.com/6WahZ52Jah

Dr Bennett said he feels the historical background to Brexit has sometimes been overlooked, even in the UK. “Most obviously issues about Ireland, which seem to have caught some people in the government somewhat unaware.”

On Twitter, several people made jokes about the appropriateness of the course having no final exam.

Dr Bennett said that didn’t mean there would be no course assessments. He would have to adapt them, however, as the semester progressed, as “no one knows what will happen”.

Speaking to Reuters at the weekend, the head of the African Development Bank, Akinwumi Adesina, said uncertainty over Brexit was threatening Africa’s economic prospects, in a way that’s “increasing by the day”.

“You have Brexit, you also have the recent challenges between Pakistan and India that have flared off there, plus you have the trade war between the United States and China,” Mr Adesina said. “All these things can combine to slow global growth, with implications for African countries.”

Botswana is not the only place to offer a course on Brexit.

The UK’s Birmingham City University has set up a Centre for Brexit Studies. Academics, it says, include “staff from across the university, displaying the cross-sector impact Brexit will have on the UK, Europe, and the world”.

The UK-based Open University also offers a free course titled “From Brexit to the Break-Up of Britain?”, which looks at “the role of nationalism and national identity” and analyses “Brexit as a symptom of the political, economic and social geography of the UK, focusing on its uneven development in a country increasingly dominated by London and the South East”.