‘Big conservation win’ for giraffes as trade in species is regulated 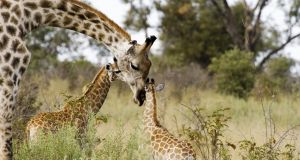 Conservationists have hailed a “big win” for threatened giraffes as countries agreed to protect the African animals from unregulated trade.

Giraffes are facing what has been described as a “silent extinction”, with numbers falling by up to 40 per cent over the last 30 years, wildlife experts said.

Threats to the world’s tallest land mammal include trade in their body parts, as well as habitat loss, illegal hunting and civil war, leaving the species vulnerable to extinction and some subspecies critically endangered.

Countries meeting for the Convention on International Trade in Endangered Species of Wild Fauna and Flora (Cites) have now voted to regulate the trade in products from giraffes such as hides, bones and meat.

The proposal from the Central African Republic, Chad, Kenya, Mali, Niger and Senegal to list giraffes in Appendix II of the Convention will not stop all trade in parts of the animals.

But conservationists said it will ensure trade is not contributing to further population declines and will provide data on the trade from around the world.

Previously the only data on the trade in giraffes has come from the US, which reported almost 40,000 giraffe items traded in a decade from 2006 to 2015 — showing trade is an issue for the species, experts said.

Matt Collis, director of international policy at the International Fund for Animal Welfare (Ifaw) and head of the organisation’s delegation at Cites, said: “This is a big conservation win for giraffes.

“It was vital that this species was listed by Cites because up to now it has been impossible to say for certain how much of the giraffe’s huge population decline is due to trade.

“Listing on Appendix II is an important step in regulating trade in giraffes, preventing any illegal and unsustainable trade and helping to safeguard this iconic species for future generations.”

“This listing could not come soon enough.

“Cites listing will ensure that giraffe parts in international trade were legally acquired and not detrimental to the survival of the species.”

International environment minister Zac Goldsmith said: “I am absolutely delighted by the decision to increase protection for giraffes around the world.”

“This is a very important step towards reducing the threat faced by these noble and iconic animals. I pay tribute to our own negotiators who made the case so firmly.” – PA