British Colombia Letter: Hunters must leave the trophy parts – head, hide and claws – at the scene of a kill 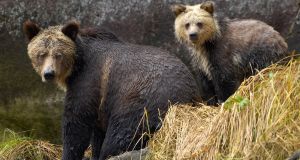 Living in rural western Canada, there is usually one thing on your mind: bears. And the rules are simple – don’t feed them, don’t make eye contact with them and whatever you do, don’t run from them. A bear will outsmart and outrun you every time.

Given this knowledge, outdoor recreation (cross-country skiing, trail running, mountain biking etc) is punctuated by the need to always carry bear spray: a can of pepper spray used in self-defence to temporarily blind a bear in the event of a close encounter.

If you did happen to stumble upon a grizzly bear (these are brown in colour as opposed to the relatively smaller black bears) weighing up to 350kg and towering 3m in height above you, chances are the sheer fear of being killed by it would probably render most of us useless in the act of pepper-spraying. (And what most Canadians don’t tell you is that when spraying pepper from the canister the wind needs to be blowing in the direction of the bear, otherwise you risk temporary blindness while dousing yourself with the perfect all-over body condiment for the bear’s next meal).

Despite the dictum that bears are terrifying, hunting grizzly bears in western Canada has long been a sport of thrills and bragging rights. In the province of British Columbia (BC) there are an estimated 15,000 grizzly bears, and each year, approximately 250 are killed by hunters.

Currently, under a lottery system, BC residents can apply for permits to hunt grizzlies in certain designated areas. Those living outside the province are allowed to hunt grizzlies only after they have hired a guide outfitter.

But not for much longer.

But there’s one catch: under the new legislation grizzly bears can still be hunted and killed, but hunters will have to leave the trophy parts (the bear’s head, hide and claws) at the scene of the kill and take only the meat away.

It’s an emotionally charged debate, involving hunters who say they should be able to take home mementos of their kills, hunting guide outfitters who say their livelihoods are in jeopardy and activists who are firmly opposed to killing grizzlies for food.

Thirty-eight environmental and animal welfare organisations, including the Humane Society International/Canada, have signed an open letter to the BC government opposing the continuation of grizzly bear hunting for meat, saying trophy hunting will likely continue “under the guise” of meat hunting.

“People don’t travel hundreds or thousands of kilometres, pay tens of thousands of dollars, and risk their lives shooting at grizzly bears to put meat on the table,” the open letter states. “Even if the head, hide and claws are left on the ground, or given to a conservation officer, the hunter will take away trophy videos, photographs and bragging rights. The bears will still be killed for sport.”

On the other side of the debate are the hunting guide outfitters who say the ban will do major damage to the hunting and outfitting industry, which brings an estimated $370 million (€240 million) each year into the province, of which $540,000 comes from licensing fees for grizzly hunts. A typical guided hunt for a grizzly bear costs between $12,000 and $15,500.

“This is not a science-based decision; this is purely an emotional decision,” said Mark Werner of the Guide Outfitters Association of BC. Werner says the new legislation seems nonsensical given that the hunting of black bears is still permitted. Under current regulations hunters are required to harvest edible portions of black bears, but they are still allowed to take home the most desirable mementos of the bear, such as the head and hide. Why allow it for black bears but not grizzlies?

Whatever the outcome, it’s a win-win for the BC government who says tourism dollars will be generated by keeping grizzlies alive as bear watching is potentially big business. The Wilderness Tourism Association estimates that the positive impact of banning hunting along the famed Great Bear Rainforest, a popular destination for adventure tourists, would bring an estimated $1.5 billion into BC in tourism revenue.

No doubt all the government will need to do now is up the province’s production of bear spray.