Harry's father Britain's Prince Charles, as well as UK Labour leader Jeremy Corbyn, were just a few of the first people to congratulate the couple on their upcoming wedding. 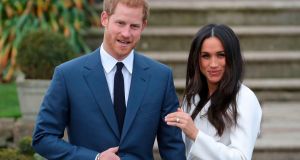 Prince Harry stands with his fiancée actor Meghan Markle as she shows off her engagement ring following the announcement of their engagement on Monday. Photograph: AFP/Getty 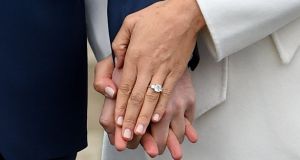 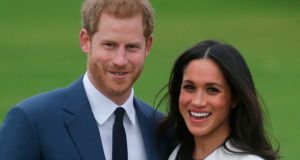 Prince Harry and actor Meghan Markle pose for a photograph after announcing their engagement. Photograph: AFP/Getty

Britain’s Prince Harry has described how he fell in love with American actor Meghan Markle after they met on a blind date set up by a mutual friend. The prince was speaking after he and Markle, who plays Rachel Zane in the television series Suits, were engaged and plan to marry next spring.

“All the stars were aligned – everything was just perfect. It was this beautiful woman just sort of literally tripped and fell into my life – I fell into her life,” he told the BBC.

Prince Harry (33), the second son of Prince Charles and the late Princess Diana, proposed to Markle (36) a few weeks ago after a courtship lasting 18 months. Soon after their relationship became known last year, Harry issued a statement denouncing the “racial overtones” of some of the press coverage of Markle, whose mother is black and whose father is white.

“Of course it’s disheartening. It’s a shame that that is the climate in this world, to focus so much on that or to be discriminatory in that sense. But I think at the end of the day I’m really just proud of who I am and where I come from and we have never put any focus on that. We’ve just focused on who we are as a couple,” Markle said on Monday.

The Prince of Wales is delighted to announce the engagement of Prince Harry to Ms. Meghan Markle. pic.twitter.com/zdaHR4mcY6

Just turned on twitter and it appears Kate Hoey is so stupid they've had to call a royal wedding to distract us all.

Markle’s mother is a yoga teacher and her father, who is of Irish and Dutch descent, is a film and television lighting designer. She grew up in Los Angeles, attending a private Catholic school before studying drama and international relations at Northwestern University in Chicago. Her first marriage, to actor and producer Trevor Engelson, ended in divorce after less than two years in 2013. A campaigner for gender equality and women’s empowerment, she spoke in Dublin in 2014 at the annual summit of One Young World.

She has been an outspoken critic of Donald Trump, whom she has described as a misogynist, and once threatened to move to Canada if he became president.

Harry predicted on Monday that Markle “will be unbelievably good at the job part of it”, royal duties. Pointing to the engagement ring he gave her, he said it contained a diamond from Botswana and two others from his late mother’s jewellery collection.

“Make sure it stays on that finger,” he said.