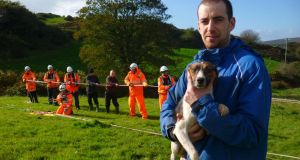 Patrick O’Sullivan from Leap with Taylor the puppy rescued by Coastguard volunteers from the bottom of a mineshaft near Glandore, Co Cork

A beagle pup that spent two nights at the bottom of a disused mineshaft has been hoisted to safety in a dramatic rescue.

Cliff rescue Coastguard volunteers descended 100ft down the mineshaft to rescue the frightened pup, who evaded a previous rescue effort that brought three other dogs to safety.

The dog’s owner was lowered to the mineshaft to help catch the frightened puppy.

The four dogs went missing while out walking with their owners on Sunday. They were found at the abandoned bauxite mine, hidden beneath thick undergrowth and briars, yesterday, after they were heard howling .

Two beagle pups and a terrier were lifted to safety, after Coastguard officials abseiled down the mineshaft and used a bucket and rope to deliver the dogs to safety. The pups, Peggy, Megan and Cracker were reunited with their owners, Patrick O’Sullivan and Graham Curley, from Leap. But the fourth pup, a 12-month old beagle named Taylor, was nervous and ran off down the mineshaft.

“The dog was cowering and growling and barking at us, she was really scared. The first day she ran from us so having Graham there made a big difference. He was very calm and relaxed and did exactly as he was instructed,” Mr Gander said.

Mr Curley had spent a night “tossing and turning” thinking about the puppy stuck down the mineshaft.

“It was some experience. I knew I was dead safe but I was nervous. The dog was afraid, she was running about, she didn’t know if she was coming or going, but I was talking away to her to calm her down,” Mr Curley said.

Taylor was hoisted up from the rocky bottom of the mineshaft in a bag and was comforted by her owners as she emerged blinking and shaking into the sunlight.

“She’s definitely traumatised but it’s great to have her back. She’ll have a bit of grub and a warm bed now and the others will be delighted to see her,” Mr Curley said.

Officer in charge at Toe Head – Glandore Coastgaurd Unit Richard Hurley said the coastguard responded in order to prevent the owners descending into the mineshaft in a bid rescue the dogs themselves.