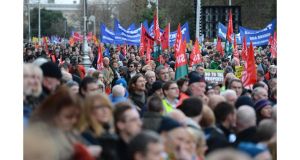 The Irish Congress of Trade Unions (Ictu) said up to 60,000 attended the Dublin rally but gardai put the attendance at 25,000. Photograph: Dara Mac Donaill/Irish Times

Tens of thousands of people attended austerity marches across the country yesterday despite the Government's hard-won bank debt deal.

The long-planned rallies to protest at spending cuts brought about by the banking crisis took place in Dublin, Cork, Galway, Limerick, Sligo and Waterford.

The Irish Congress of Trade Unions (Ictu) said up to 60,000 attended the Dublin rally but gardaí put the attendance at 25,000.

He said there would be no more "stoic little pixie heads" and "no more Mr nice guy".

He said a situation where Irish people were paying 42 per cent of the European bank debt burden was unfair.

A deal with the European Central Bank allowing Ireland to stretch out the cost of bailing out Anglo Irish Bank did not dampen the turnout for the protests.

"I've no confidence at all in the deal, it won't make any difference to ordinary people," said Alfie Murray, marching in Dublin with his 8-year-old grandson.

"It's the next generation that'll shoulder the cost," he said.

Marches organised in Cork and Sligo had an estimated turnout of 6,000, according to gardaí, while protests in Limerick, Galway and Waterford attracted crowds of about 2,000.

Ireland's bank debt deal, announced earlier this week, saw the cost of bailing out Anglo Irish stretched out over 40 years rather than 10, cutting the Government’s borrowing needs by €20 billion over the next decade.

"The jury is out on this deal," SIPTU trade union president Jack O'Connor said.

"We anticipated a lower turnout because of it, but went ahead as planned because people clearly want to know what these agreements actually mean for them day-to-day," he said.

In the crowd, a large number of public sector workers, frustrated by cuts in their basic pay and additional workplace demands, expressed anger at Government plans to make further cuts in the sector.

"They want us to pay all their bills and we're getting tired of it now," said Patrick Healey (57) a teacher who has seen his wages cut by €700 per month, or about 20 per cent, in the last five years.

Warning to beach-goers over venomous weever fish hiding in the sand 14:55
PSNI warning as more than £80,000 lost in spate of scams 14:35
Dan Martin fractures bone in his back but still hopes to ride Tour de France 14:02
‘It was pitch black’ - Rescued teenager describes night afloat with her cousin in Galway Bay 13:40
Coronavirus: Number of outbreaks in Irish homes rising for five straight weeks 13:23