Thatcher believed the Irish were ‘all liars 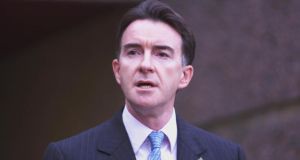 Former Northern Ireland secretary Peter Mandelson said today the only thing Margaret Thatcher ever told him was that the Irish were “all liars” and not to be trusted.

He revealed the 1999 exchange as he explained why he did not want to attend the former prime minister’s funeral service.

He said he “ didn’t feel he knew her well enough” to apply for the tickets offered to peers, he told BBC Radio 4’s Today.

“Although I helped to organise the Labour Party’s opposition to her policies throughout the 1980s, I only ever met her once. It was the day I was appointed Northern Ireland secretary and our paths crossed,” he said.

“She came up to me and she said, ‘I’ve got one thing to say to you, my boy ... you can’t trust the Irish, they are all liars’, she said, ‘liars, and that’s what you have to remember, so just don’t forget it. With that she waltzed off and that was my only personal exposure to her.”

Lord Mandelson, one of the central architects of New Labour, has criticised the scale of the funeral but accepted the Iron Lady “reframed British politics”.

“I think what she was right to do was to bring home to us the reality that Britain could not afford rampant inflation, that state monopolies needed commercialising, that personal tax rates were too high and that enterprise was too unrewarding,” he said.

“She was also right to argue that deregulation can be a valuable spur to innovation and efficiency and of course she tackled what was then a very disruptive and irresponsible trade union culture.

“But the truth is also that in cutting back the state necessarily, she overlooked what the state can also do successfully.”