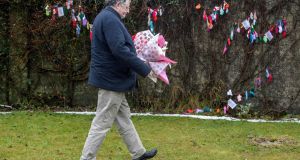 A man lays flowers this week at a shrine in Tuam, Co Galway, erected in memory of up to 800 children buried at the site of the mother and baby home there. Photograph: Paul Faith/AFP/Getty

The women and children who suffered in mother and baby homes were “abandoned by their church”, a Cork priest has said during Sunday Mass.

Fr Colin Doocey addressed the issue of the Report of the Commission of Investigation into Mother and Baby Homes in his sermon at Mass in St Michael’s Church, Blackrock, Cork, near where the Bessborough home operated.

In light of the publication of the report, he said the Mass would remember all who died in the institutions and “were not accorded the dignity of a Christian burial”. Fr Doocey asked those listening to the livestream to “pray for healing of their loss, and of their pain and humiliation”.

Not far from the Bethany home, the Rev Stephen Farrell of Zion Parish Church held a “service of lament and repentance” in response to the report. Rev Farrell spoke about how many of the babies in the Bethany home were baptised by the clergy of the Zion Parish.

“That’s why we have our baptismal register placed on the altar for this service which we hold for the children, the mothers, the hurt and the pain,” he said. Rev Farrell said people still come to the parish seeking birth certificates and a “clue to their identity”.

“I simply don’t know the full extent of the role of my predecessors or of this parish in the life of Bethany, but I am sorry and I apologise for their part in it, for their failure to demand and to ensure the women and children received the care and the respect they deserved,” he said.

He urged listeners to ask “what in the life of the church and of society will be the collective shame of the next generation?”

The priests offering Mass at Kilrush, Co Clare, and at the Navan Road parish in Dublin, near the Pelletstown home, did not mention or respond to the report in their Sunday Mass.

Parish Priest Fr Gerry Clarke SJ, at the Gardiner Street parish near the St Gerard’s home, said the report “brought a realisation of the darkness that existed in Ireland from the time of our independence up until the 1990s”.

“I just wonder myself how a Catholic country seemed to go so far away from what’s really at the heart of the gospel,” he said.

The Church of Ireland’s Canon Patrick Comerford, the priest-in-charge of the Rathkeale Group of parishes, gave a sermon this morning criticising the church’s role at the Bethany home.

He welcomed the apology from the Archbishops of Armagh and Dublin for the involvement of some members of the Church of Ireland in the Bethany home, but said “they did not name the Irish Church Missions when they said, ‘One of the most prominent groups was associated with the Bethany home, which operated under a general Protestant ethos while being independently managed’”.

“The Irish Church Missions, the institution singularly responsible for the Bethany home, has remained singularly silent since the report was published, unlike, say, the many orders of nuns that have apologised,” he said.

“It is not as if Irish Church Missions are inactive or have few people on the ground to issue a deeply needed institutional apology over the past few days. It is busy sowing the seeds of division within the Church of Ireland and the Anglican Communion,” he said.

Speaking on RTÉ Radio 1 this morning, the Catholic Primate, Archbishop Eamon Martin apologised for the church’s role in the mother and baby homes and said the church should make reparations “if it’s proportionate and it’s in account of the findings of the commission”.

“I think that we can show that our apologies are sincere by being willing to contribute in any way that we can,” Archbishop Martin said.

He told RTÉ’s ‘This Week’ that he was “ashamed to realise and to think of the number of vulnerable women, their unborn children and their infants who were stigmatised and shamed and excluded from their homes and families and ostracised, really, from their parishes and communities”.

Bishop of Limerick Brendan Leahy issued a statement this morning, saying the “frozen heart” women found during their time in mother and baby homes was a “dreadful failure of church, society and State.”

In his weekend homily, streamed from St John’s Cathedral, Bishop Leahy said what occurred “did not live up to our Christianity. We forgot the Gospel. We failed them. We need to ask forgiveness.”