After a year-long public campaign to raise awareness around gender inequality, the #WakingTheFeminists movement is winding down its social media presence and shifting its focus to theatre companies and their programmes. 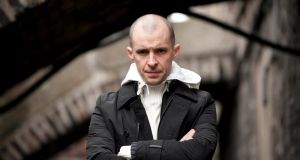 Tom Vaughan-Lawlor as misogynistic drug lord Nidge: “I see first-hand how different it is for women in the acting industry.” File photograph: RTÉ 1

Actor Tom Vaughan-Lawlor, best known for his portrayal of misogynistic drug lord Nidge in TV’s Love/Hate, knows “first hand” that women actors are paid less, have fewer roles open to them and face greater scrutiny over how they look than male actors.

Husband of actor Claire Cox, he was speaking at an event marking the first anniversary of #wakingthefeminists, a movement calling for equality for women across Irish theatre.

It began in October 2015, initially in response to heavily male-dominated programme of events to mark the 1916 centenary, at the National Theatre (NT).

“My wife is an actor and I have two sisters in the arts,” said Vaughan-Lawlor. “I see first-hand how different it is for women in the acting industry. There are the very simple things like pay, available roles in theatre and TV, and the focus on women’s bodies is a very pertinent.

“The reason I was invited to speak here and why I wanted to speak is because gender inequality affects people I love; and for all the female colleagues who, over the years, have inspired me to be an actor.”

Research, commissioned by #wakingthefeminists and just published, shows none of the top theatre organisations has achieved equality for women over the past 10 years, across four areas – directors, authors, cast or designers.

The top three – the Abbey, the Gate and the Dublin Theatre Festival – come out worst.

Since the first call-out to people who wanted to talk about gender inequality in the industry, and a packed meeting in November 2015 in the Abbey – home of the NT - a gender quality sub-committee was established at the NT and the movement began meeting the major national theatre organisations.

“This is clear evidence that we have a chronic problem with gender inequality,” said co-founder of the movement Lian Bell. “It’s a problem first of all because we are talking about the spending of public money - and if it’s disproportionately going to men, that’s a problem.

“But importantly, if theatre is dominated by men, it’s not representative of society. It’s a question of whose stories are being told, and how they’re told. For me, theatre should be vibrant and enriching.”

Echoing her, Vaughan-Lawlor said a world where men were over-represented was a “narrow conversation”.

“If you are acting in a predominantly male company you start to crave a female energy to work with, to respond to and to bring out the colours in our sensibility.

“ We know it’s a societal problem. It’s not just the arts. But if you can be involved in your sector to promote a gender balance, hopefully you are doing your bit for society in what way you can.”