Pensioner in her 70s, who is owed €13,000, asks department to prove card is mandatory 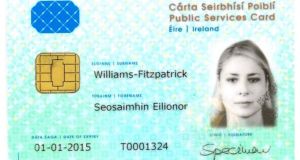 A woman in her 70s has not been paid her State pension for 18 months because she refused to register for a public services card.

The woman, who did not wish to be named, told The Irish Times she felt “bullied” following several letters from the Department of Social Protection inviting her to register.

Many public bodies have increasingly been using the card to validate people’s identities for the purposes of delivering services. About 2.75 million have been issued to date but Ministers have insisted the card is not “compulsory”.

However, civil rights groups have described it as a “national identity card by the back door”.

The woman had told officials that she would get the card if they could show her it was “mandatory” but nothing had been produced to show her that this was the case.

She said when she first learned that she was entitled to a non-contributory pension of €166 per week, as well as her contributory pension, officials had called to her house to verify her details, including her marriage certificate.

However, the department cut the non-contributory pension off when she refused to register for the card. She went through an appeals process in efforts to restore the weekly payment but her appeal was declined.

She said she had also been told she would not be entitled to back payments of the amount owed, even if she registered at this point. The pension amounts to more than €13,000 for about 80 weeks of non-payment.

She has recently contacted Minister for Social Protection Regina Doherty to look into her case. The Minister’s constituency office said it could not discuss an individual case.

Asked whether the card was now mandatory, the Department of Social Protection said welfare legislation required a person “to satisfy the minister as to their identity and allows disqualification from receipt of a benefit in the event that it is not done”.

It was not possible for a person to satisfy the minister as to his or her identity without being registered in a process which “results in them being issued with a public services card”. The registration process is known as ‘SAFE 2’.

It said the majority accepted “the importance of, and need for, the robust SAFE 2 identify verification process when in receipt of a social welfare entitlement”.

“The decision to suspend or stop a payment is never made lightly. However, where a customer does not “satisfy the Minister in relation to identity as required” as per the legislative requirements outlined above, a payment can be stopped or suspended.”

It said the appeals office operated independently of the department.

The department said it did not collect data on the number of individuals who had had payments suspended or stopped by reason of failing to complete the registration process. It was a matter for each public body how it implemented the SAFE 2 standard for services.

It will shortly be required for all passport and driving licence applications.

The total cost of the public services card project will have reached about €60 million by the end of 2017.

The Government willget a 5 per cent discount on the contract if more than three million cards are produced by the end of this year.