What’s on around Ireland this weekend 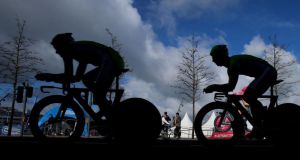 Giro D’Italia riders during a training session on stage one of the 2014 Giro D’Italia. Photograph: Niall Carson/PA Wire

Celebrations ahead of the arrival of one of the most prestigious cycling events Giro d’Italia will run in Dublin this weekend. Cycling themed cultural events have been organised throughout the city. The Irish Cycling Show will take place in Merrion Square park starting at 10am on Saturday and Sunday. The One4all Women on Wheels Giro cycle with Oxfam is a 22km charity cycle to try out the final leg of the Giro cycle before the professionals arrive. It starts from 8.30am from Merrion Square on Saturday

To see the full list of events go to: dublincity.ieGiroDItalia

Leinster will take on Edinburgh in the final game RaboDirect Pro12 regular season at the RDS on Saturday at 6.30pm. There will be an on-pitch presentation to Brian O’ Driscoll and Leo Cullen in honour of their careers in blue after the match. In Thomond Park, Munster will face Ulster in their last round game of the season. The game will also kick off also at 6.30pm.

West Cork welcomes back the annual feast of fiddling from Friday to Sunday. Acts on this year’s line up for the traditional and folk festival include Cahalen Morrison and Eli West, Eddi Reader, This Is How We Fly and legendary John Sheahan with Eamon Keane. Artists will play in various venues around Baltimore.

The music and dance festival follows and explores the development of music from ancient to early medieval and renaissance until Sunday. There will be concerts, lectures and workshops to replicate the instruments and interpret the music from Europe’s early musical culture. It will feature performances from Greek, Roman, Scandinavian and Irish music.

A public debate on the ethics of sport and the role of philosophy in the classroom will take place at Laurence Gilson Summer School in Oldcastle, Meath from Friday to Sunday.