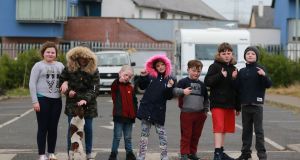 Children pictured at the halting site on the Balgaddy Road, Clondalkin in January. Photograph Nick Bradshaw 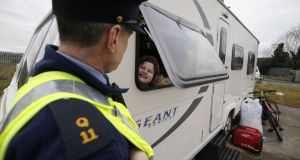 A garda speaks to a child at the halting site on the Balgaddy Road, Clondalkin in January. Photograph Nick Bradshaw

South Dublin County Council is planning legal proceedings to evict a group of Travellers, including 28 children, from a site if they have not left by Friday week.

The five families, who are related, had come from the Dublin City Council (DCC) and Clare County Council areas late last year due to “overcrowding” and conflict with other families, they say. The west Dublin site has no running water or electricity and the families say they have nowhere else to go.

The council had planned to evict them in January saying it had no ‘duty of care’ to them as they were not from the council area. The families however said they had family connections to Clondalkin and they had enrolled their children in the local schools.

Following a stand-off between the families and supporters, including a number of councillors and the Clondalkin Traveller Development Group (CTDG), the council agreed to postpone its eviction plans.

At the January council meeting, councillors passed a resolution calling on management to “immediately halt the eviction of the families and work with other local authorities and the CTDG to find a solution for the families involved.”

Since then, according to CTDG manager Doreen Carpenter, the council met the families and took details including PPS numbers with a view, they were told, to assisting them apply for accommodation.

“That was about three weeks ago. Since then the families have heard nothing, haven’t been told anything about their application for the housing list,” she said.

In an email to councillors on Wednesday, a senior manager in the council’s housing section said: “I wish to notify you that correspondence has been issued to the illegal occupiers on the old School Site, Balgaddy/Griffeen Avenue, today the 27th February 2019.

“The correspondence advises that if the site has not been vacated by 4pm on Friday 8th March, the Council will commence legal proceedings for the purpose of securing vacant possession of the site and the removal of all vehicles, caravans and other structures there-from.”

Mr Carpenter said there was little the CTDG could do other than support the families and be there for them. “But we don’t have accommodation to give them.”

People Before Profit Councillor Madeleine Johnasson said she was “just fuming” when she received the email, saying it breached the motion she had put before the council in January and which was passed.