Katie Ascough given award for ‘extraordinary and notable work’ 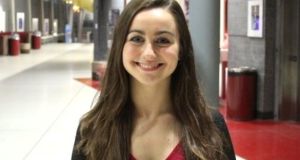 Katie Ascough said she accepted an award from UK group ‘Right to Life’ on behalf of ‘all students and right-to-lifers’ who suffer ‘unjust discrimination because of their beliefs’. File photograph: Jack Power

Katie Ascough, the impeached former UCD Students’ Union president, has been award a pro-life award for her work on campaigning against abortion.

Ms Ascough received the Westminster Award in London on Wednesday which recognises “extraordinary and notable work and achievements that safeguard the dignity and right to life of human beings”.

The award was presented by the UK group ‘Right to Life,’ in honour of their founder, Phyllis Bowman who was also a founder and director of the Society for the Protection of Unborn Children (SPUC). The society took a legal action against UCD Students’ Union in 1989 for publishing abortion information in their “Welfare Guide.”

On the Right to Life website, it states that since her impeachment: “Ascough has spoken in favour of freedom to speak and to associate on campus for those with views that do not reflect the student union orthodoxy, such as right-to-lifers, becoming a symbol of the difficulties and determination of the student right-to-life movement. Ascough has also signalled her intention to campaign in favour of Ireland retaining the Eighth Amendment.”

Ms Ascough, an anti-abortion activist, is the daughter of Tom Ascough, who sits on the Iona Institute board of directors. She was impeached by UCD students last year.

According to the Catholic Herald, Ms Ascough said she accepted the award on behalf of “the pro-life generation” and all people who find themselves in difficulty because they support the right to life of the unborn child.

“I accept it not only on behalf of myself, but of all students and right-to-lifers more generally who suffer unjust discrimination because of their beliefs, in the teeth of bigotry and illiberalism from abortion advocates on campus or in wider society,” she said. “I urge such people to stay strong, and to follow the courage of their convictions. It may be difficult, but ultimately, I can assure them, it’s absolutely worth it.”

The campaign to remove Ms Ascough from her role began after she removed a page on access to abortion information from the students’ union Winging It magazine following legal advice. This meant the magazine had to be re-printed at a cost of between €7,000 and €8,000.

The information removed from the magazine, aimed at first year students, included the prices of abortion during different gestation periods in other countries, and a paragraph relating to how to obtain an abortion pill to use in Ireland. While it is lawful to provide information in Ireland about abortions abroad, it is subject to strict conditions.

The impeachment referendum started after a petition was signed by 1,200 students. In total, 4,540 students voted to impeach Ms Ascough, out of 6,572 students who cast a ballot.