Charles and Camilla to visit home of Daniel O’Connell 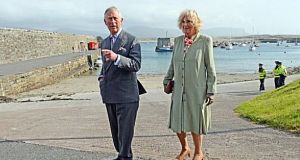 Prince Charles and his wife Camilla will visit visit several notable venues during their trip to Ireland. File photograph: The Irish Times

Prince Charles and his wife Camilla are to visit of the home of Daniel O’Connell, the Liberator, at Derrynane in Co Kerry during their three-day visit to Ireland next month.

The heir to the throne and Duchess of Cornwall are to visit Cork city and north Cork as well as Co Kerry during the trip which begins with their arrival on June 14th at Cork Airport.

It is understood that the couple will visit the English Market in Cork where Prince Charles’s mother, Queen Elizabeth received a warm welcome from stall holders, including fishmonger Pat O’Connell.

Prince Charles, who served in the Royal Navy in the 1970s, will also visit the Irish Naval Service HQ at Haulbowline. The facility was an important Royal navy base up until Irish Independence.

According to an informed source, Prince Charles is interested in seeing the base which played an important role in protecting Allied shipping from German submarines in the Atlantic during the first World War. And he will be given a guided tour of one of the Naval Service’s newest ships and briefed on the service’s involvement in Operation Sophia to rescue migrants in the Mediterranean

Prince Charles will be following in the footsteps of his ancestor queen Victoria when he visits Killarney as it’s expected he will visit Muckross House where she stayed in 1861.

Queen Victoria also stayed at the home of Lord Castlerosse at Kenmare House in Killarney where she met James O’Connell, brother of Daniel O’Connell who secured Catholic emancipation.

It is understood the prince is keen to see O’Connell’s home which houses a museum in his honour.

The Prince is also expected to visit the Lakes of Killarney and Siamsa Tíre in Tralee during his visit to The Kingdom.

Security for the visit will be tight and all Garda leave in Cork city, Cork north and Kerry divisions has been cancelled to ensure sufficient officers are available to police the various public events.