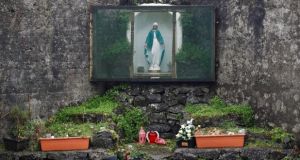 A shrine with an image of the Virgin Mary is seen on the site of the former mother-and-baby home run by the Bon Secours nuns in Tuam, Co Galway. File photograph: Peter Nicholls/Reuters

Survivors of the Tuam mother-and-baby home, where the remains of hundreds of babies were found last year, have renewed calls for a complete excavation of the site and DNA testing on all the bodies .

The Commission of Investigation into Mother-and-Baby Homes last year confirmed that “significant” quantities of human remains had been found buried under the site of the former institution for unmarried mothers, which was run by the Sisters of Bon Secours.

The remains belonged to children aged from about 35 foetal weeks to three years.

A report by an expert group published by Minister for Children Katherine Zappone last month outlined five options for the site, including the creation of a memorial, and the continuation of examinations on the site.

The technical group report said its understanding was that the human remains “may lie in a structure that was designed for the treatment of sewage waste”.

It said there was “currently insufficient information about these human remains to determine the causes or circumstances of the death of these individuals”.

In a statement on Friday, the Tuam Home Survivors Network said its members had given careful consideration to the expert technical group’s report.

It said it was the view of the members that the only appropriate action was “a complete excavation of the Tuam site to ensure the recovery of all human remains contained there”.

The appropriate actions also included relocation “to an appropriate and secure location of all human remains recoverable at the site”.

The group said the recovery and relocation must be undertaken “with all the expertise and resources necessary to preserve as far as possible, the individual identity of each set of remains”.

The survivors also sought postmortems in respect of each set of human remains and the taking and cataloguing of DNA from all remains “to create the most complete database possible”.

The members said all those who had “reasonable grounds” to believe that members of their family may be buried at the site should be invited to provide their DNA for testing, and that this invitation should be “published widely including the UK and North America”.

Chairman of the Tuam Survivors Network Peter Mulryan also called for the immediate convening of an inquest into the deaths.

It was the view of the members of the network “that the only useful discussion which could take place must be confined to the urgent implementation of what has to be done”, he said in his statement.

“If the Minister wishes to contest the view of the network, we request that she provide a comprehensive written response.”

Ms Zappone said in December that before any decision was taken she first wanted to consult with the local community in Tuam and other affected parties, such as relatives of those who were resident in the home.

She said the consultation process, which would be undertaken by Galway County Council, would take three months.

Separately, the Minister has asked Professor Geoffrey Shannon, in his role as Special Rapporteur on Child Protection, to examine a number of human rights issues of “a social-legal nature” identified by the technical group, and to report to her on these.

Such socio-legal issues identified by the group, but falling outside its terms of reference, included human rights issues around the right of an individual to “a respectful and appropriate burial”.

It said there was also the possibility that there may be an obligation under international human rights law, including under the European Convention on Human Rights, arising from the right to respect for family life.

“This could arguably entitle living family members to know the fate of their relatives.”

The report added that there was “an obligation on the State, pursuant to the Irish Constitution (Bunreacht na hÉireann) and under human rights law, to fully investigate the deaths so as to vindicate the right to life of those concerned”.

It is likely that these are among the issues that will be examined by Dr Shannon.

The commission was set up in February 2015 after a Galway-based historian, Catherine Corless, published research that revealed death certificates for 796 children at the Tuam mother-and-baby home with no indication of their burial places.