Question asking whether someone is heterosexual, lesbian, gay or bisexual is being tested in quarterly household survey 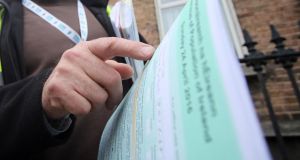 A national census of the population is conducted every five years. Photograph: Nick Bradshaw

The Central Statistics Office (CSO) is examining whether to include a question on sexual orientation in the 2026 census.

A spokeswoman for the CSO said a question asking whether a person was heterosexual, lesbian, gay or bisexual was being tested for the first time as part of the quarterly national household survey.

“It has just been included in the household survey for quarter one 2019. It is a question that requires full testing to get it right. We’ll start to have the first results from that later in the year and they will feed into discussions about what questions will be included in the 2026 census. It wouldn’t be included until then.”

A national census of the population is conducted every five years. The next is in 2021, and consultations on questions to be included in it are already complete.

The CSO statement comes as an OECD report calls for the inclusion of questions on sexual orientation and gender identity in member states’ censuses to tackle discrimination.

Titled Society at a Glance 2019, the report says: “Making LGBT individuals and the penalties that face visible in national statistics is a prerequisite for their inclusion.” It adds greater acceptance of LGBT people will “improve gender equality broadly speaking and hence expand social and economic roles, especially for women”.

In Ireland, drawing on data from national surveys other than the census, it says about 2 per cent of the population self-identify as LGB, while data on transgender people across the 36 member states “remain scarce”.

However, the number of people disclosing they are LGBT “is consistently on the rise”.

“This trend is likely to continue in the future since disclosure is more frequent among young cohorts. In the United States for instance only 1.4 per cent of people born before 1945 consider themselves LGBT, against 8.2 per cent among millennials (born between 1980 and 1999),” says the report.

Discomfort about transgender people is “pervasive” and “slightly higher than discomfort with LGB people” across the OECD.

“Anti LGBT discrimination hampers the economic and mental health of millions” and penalises them with lower pay, lower employment rates and higher rates of mental ill-health. Diminished LGBT participation in the economy is a loss to those economies, says the report.