Temporary housing: ‘We’re still not in our community. Still homeless’

Case study: ‘The longest we can stay here is 18 months. The stress is less but it’s not gone’ 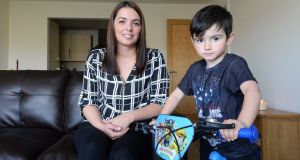 After 18 months in emergency homeless accommodation, Toni Russell (28) and her two children have just been placed in temporary housing in south Dublin.

“It’s much better than the B&B,” she says of the two-bedroom apartment in a Nama-managed block now accommodating about 50 homeless families.

“We have space, can do normal things like cook, and activities like baking. The kids can play in peace,” she says.

“But it’s not a stable home. The longest we can stay here is 18 months. So that’s at the back of your mind all the time. The stress is less but it’s not gone.”

The block, though recently built, is not well maintained. The lift does not work and the stairwells are dirty, with rubbish and stained walls.

Toni had been living in Lucan for six years with her sons Cullen (4) and Kane (8), before her landlord gave three months’ notice to quit.

“I started looking for somewhere immediately. It was horrendous. No landlord would take the Housing Assistance Payment (HAP). South Dublin County Council said there was nothing they could do until I presented as homeless.”

That happened on Cullen’s third birthday, in October 2015. The council said there was no emergency accommodation available, but she could try to find somewhere herself - “self-accommodate”.

“I sat in a coffee shop calling every hotel and B&B, and got nowhere. I phoned the council again, sobbing. They told me there was a B&B and to go there. I put the kids to bed with a smile that night. Then I just cried and cried,” she says.

They spent 12 weeks there before moving to the B&B in Castleknock - two buses and 90 minutes away from her sons’ schools. “I got up at 5.45 in the mornings, spent about €50 a week on buses.

“Kane’s schooling suffered a lot. We’d be late and sometimes I’d get bouts of depression. When that happened, the whole week crumbled. I’d wake in the morning saying, ‘Not another day’. You get tired.”

Kane, she says, was “angry, naughty a lot...He just hated it” in the B&B. When they moved into the apartment, for which she pays €35 a week, he “jumped for joy...He was dying to run into school to tell his friends. It shows you how much kids need a home.

“I would be afraid of being here and the council thinking I am housed. We still have long bus journeys to school, we’re still not in our community. We’re still homeless.”

A spokesman for the Department of Housing said the HAP would be “a critical vehicle through which families will exit” homelessness.

“To date in 2017 in excess of 500 Homeless HAP tenancies have been achieved and.. enabled families to exit homelessness.”

Further homes would be provided through social housing, the repair and leasing scheme and homes sourced by the Housing Agency, he said.