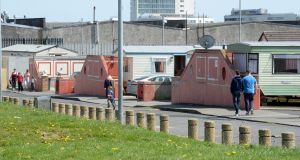 Local authorities failed to spend more than €1.2 million provided to them by the Department of Housing to build Traveller accommodation last year.

Eight local councils did not invest any money in housing for the Travelling community last year, despite being allocated hundreds of thousands of euro in funding to do so by the State.

Kildare County Council was given €700,000 over the past three years to provide more Traveller accommodation in the county, but did not draw down any of the funding.

A planned eight-unit Traveller housing site at Tankardsgarden, Newbridge, was approved in 2012 and expected to be opened in 2014, but construction has still not begun on the development.

The councillors instead want to place Travellers in normal social housing, rather than develop more halting sites. “Nobody wants a halting site in their area,” Mr Larkin said.

Clare County Council was allocated €200,000 by the Department of Housing last year but did not invest any of the money available, despite 13 Traveller families, including 40 children, living in temporary roadside sites without regular running water, electricity or toilet facilities in the county.

Carlow County Council spent none of the €130,000 it was granted to fund Traveller housing. The council had estimated 109 new Traveller families would need accommodation in Carlow between 2014 and 2018, but has spent no money since 2013, and does not plan to invest in additional Traveller housing in 2017, a spokeswoman said.

Waterford City Council was given €676,300 to develop Traveller housing over the past two years, but spent just €13,545.

The Irish Human Rights and Equality Commission (IHREC), which reports to the UN, said Travellers as a recognised ethnic minority have a “right to culturally appropriate housing”.

Emily Logan, chief commissioner of the IHREC, said: “Local authorities should be penalised if they do not spend the total money allocated for Traveller housing in a given year.”

In total, €4.3 million of the €5.5 million provided to local councils to invest in Traveller accommodation in 2016 was spent, according to a Department of Housing review seen by The Irish Times.

Cork City Council left €470,900 unspent over the last two years. One of the largest halting sites in the country, Spring Lane in Cork, is described as being in “shocking condition”.

Originally built for 10 families, 34 families and more than 150 people are now living in the site. Cork City Council has no existing plans to build an additional halting site to ease overcrowding.

Local Fine Gael councillor John Buttimer said the “preference would be to look at social housing, rather than new halting sites” to house the families. Sinn Féin Cork councillor Thomas Gould said the wider shortage of housing means that plan will be difficult in practice.

“When you look at the shocking conditions children are in at the site . . . it should never have got this far,” he said.

Dún Laoghaire-Rathdown County Council, where 10 members of the Travelling community, including five children, died in a fire at a Carrickmines halting site in October 2015, drew down only €129,552 from an available €419,095 last year.