Locals warn of increasing drug use in area, while some streets are ‘basically lawless’

Residents and proprietors of Temple Bar have called a meeting to address the on going issues of drug taking and anti social behaviour in the area. 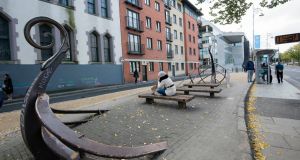 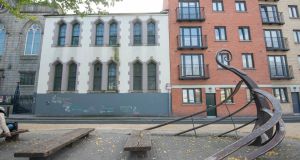 Residents and business owners from the west end of Temple Bar will hold a meeting on Tuesday to discuss what they say is the increasing level of anti-social behaviour in the area.

The latest resident to lead the charge against this seemingly perpetual problem for the area between Fishamble Street and Parliament Street is Barry Roche, who was spurred to action after Dublin City Council removed railings, shrubbery and four maple trees from an area outside the Exchange Street entrance to the Smock Alley Theatre.

The result of the work, Roche says, has been to bring drug use and dealing out into the open.

Though it has been happening at that spot for years, he says the shrubs and trees at least provided cover and, to an extent, hid the problem.

A case of out of sight, out of mind, certainly, but Roche insists it afforded residents in the immediate area a better quality of life.

Now “it’s like having drug dealers in my sitting room on a daily basis”.

His main gripe is with the lack of consultation from the council before it carried out the works.

“There was no dialogue; there was no legal notice of intent. Nobody knocked on the door and said ‘these are the plans’,” he says.

A Dublin City Council spokesman said the work has “significantly enhanced” the area “which had become run down and in need of upgrade”.

He added that the council did not accept the enhancement could contribute to a perceived worsening of problems at the space.

The meeting, to be held in the Clarence Hotel, will be the second such gathering of west Temple Bar locals in recent weeks.

The last one attracted 120 business owners and residents and Roche expects a higher number next week.

Local city councillor Mannix Flynn says dealers use the heavy footfall in the area as cover for selling while addicts use the nearby lanes to shoot up.

“On top of that then you have a youth issues whereby you have children coming in who use the area for drinking and socialising, and usually that results in a lot of trouble,” he says.

“It’s not about demonising young people but let’s face some facts. There’s a subculture of individuals who come in from other parts of the city and cause havoc.”

Yana Sharbunaerva, a manager at a mobility aid shop on the corner of Fishamble Street and Essex Street West, says she sees anti-social behaviour from youths constantly.

“A couple of days ago a group of three kids, young teenagers, poked into the shop,” she recalls.

One of them went into a private area at the back of the premises as the others distracted her with questions about mobility scooters.

Sharbunaerva believes he was probably looking for a cash box. The following day six teenagers came in. “It is a permanent problem,” she says.

The death last month of Gareth O’Connor again focused the minds of locals on the issue of anti-social behaviour and violence.

Kevin McNamara, a tattoo artist who works at Dublin Ink, was nearby when the attack occurred.

He says the local residents and business owners are “a really great bunch” and that Cow’s Lane itself is a nice street with plenty of activity, but issues such as drinking on the street, fighting and drug use is a “very large downside” to the area.

For Mannix Flynn, the situation in west Temple Bar is just an example of a wider problem blighting Dublin city centre.