Teen sharing of explicit images may lead to stress disorder 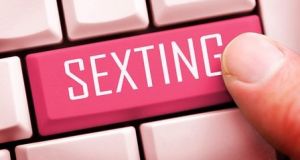 The Bullies, Bullied and Bystanders Conference 2016, hosted by the Anti-Bullying Centre in DCU, was presented with evidence that Irish children are among the most prolific “sexters” in Europe. File photograph: Getty Images

Adolescents who share sexually explicit images of themselves often endure verbal and physical harassment which may lead to them developing symptoms of post-traumatic stress disorder, a conference has heard.

The Bullies, Bullied and Bystanders Conference 2016, hosted by the Anti-Bullying Centre in DCU, was presented with evidence that Irish children are among the most prolific “sexters” in Europe.

Dr Sheri Bauman of the University of Arizona informed the gathering of the severe consequences that can follow from compromising photos of a person going viral, and referenced a pan-EU study that showed around three per cent of Irish children as young as 11 and 12 have received sexual messages online.

However, older adolescents remain a particularly vulnerable group when it comes to “sexting”, she said.

“Older adolescents are much more likely to sext than younger ones. And we know that as adolescence continues developmentally, there is an interest in sexual development, the hormones have increased,” she said.

“I’m talking today about adolescents and younger adolescents, [but] this practice is not confined to adolescents.

“There are many studies that indicate... many married couples, many older couples, people with children [do it]. This isn’t some small, deviant group of adolescents,” she added.

Compromising images may be sent in the context of a relationship, to gain the attention of a potential sexual partner or simply to shock the recipient, according to Dr Bauman.

She said the sharing of such photos often leads to consequences beyond the initial humiliation of seeing them on cyberspace.

“Very often, youths will describe that when they get to school they are subjected to what they call ‘slut-shaming’, so that others begin to call them names and sometimes throw things at them - they really target them.

Dr Bauman also mentioned the need to expand the focus of relationships and sexualities education in schools beyond biological information, and to take a more relatable approach for young people when it comes to issues such as sexting.

Among the other keynote speakers at the conference was Dr Christiane Spiel from the University of Vienna, who discussed Austria’s experiences of attempting to implement a violence prevention strategy in schools, and Prof Peter Smith from Goldsmith’s University London.

Prof Smith provided a comparison of four meta-studies of bullying among schoolchildren from around the globe, and found that countries such as China, Indonesia, India and Pakistan tend to have a higher bully-to-victim ratio than places like Ireland and England.