Nuns say critical scene in ‘Philomena’ was made up 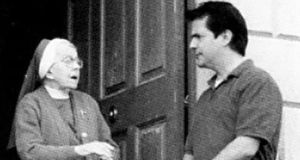 In the growing panoply of Irish religious villains on screen, none is more chillingly depicted than Sr Hildegarde McNulty in the movie Philomena.

Portrayed as a vindictive younger nun who forces Philomena Lee to give up her three-year-old son for adoption in 1955, she is shown in the film’s climactic scene as mellowing nothing with age.

Accused by the journalist Martin Sixsmith – played by Steve Coogan – of thwarting attempts to reunite mother and son, she responds: “Let me tell you something. I have kept my vow of chastity my whole life. Self-denial and mortification of the flesh is what brings us closer to God. Those girls have nobody to blame except themselves.”

Even in a film that brings the viewer through an emotional wringer, the scene has the power to shock. Except the meeting couldn’t have happened. Sr Hildegarde died in 1995. Mr Sixsmith did not start helping Philomena Lee find her son until 2004. Tragically Anthony Lee, who became Michael Hess, died from Aids before mother and son could be reunited.

The Sisters of the Sacred Hearts of Jesus and Mary who ran the mother and baby home at Sean Ross Abbey in Roscrea have accused the filmmakers of being misleading and say the real Sr Hildegarde helped many mothers to become reunited with their children.

The filmmakers Pathé responded by stating that Philomena is “not a documentary. The factual scenarios have been changed but we believe the substance of the story to be materially true.”

Strong emotions
The real Sr Hildegarde provokes strong emotions in those who knew her, as judged by contributors to the RTÉ Liveline radio programme recently.

Audio clips of a RTÉ interview recorded in 1986 with Sr Hildegarde portray a woman weeping over many of the mothers who were in her care.

The controversy has, if anything, enhanced the draw of the filmwhich has taken £7.1 million (€8.5 million) at the UK box office and more than €1 million in Ireland to date.

Mr Sixsmith’s book says both Lee and her son, who become chief counsel to the Reagan and Bush administrations, visited the abbey looking for each other in 1977, yet Sr Hildegarde never passed the information on. However, the congregation’s spokeswoman, Sr Julie Rose, says there is no record of any meeting between Lee and the nuns in 1977. Neither is there any record of meetings between the nuns and Hess and his adoptive sister, Mary, who was also born in the abbey. “We do hold a view as regards the veracity of a number of statements in the book,” she said.

Mr Sixsmith said Philomena Lee was meticulous in keeping in touch with the abbey over the years. His book contains a photograph of Hess with Sr Hildegarde at the abbey in 1993 when he was dying from Aids. He died in 1995.

Another point of controversy is the claim that the nuns were selling babies, through the cover of donations, to rich Catholic couples in the United States.

The allegation is denied by Sr Julie. “No children were sold by any mother or the congregation, to any party, nor did the congregation receive any monies in relation to adoptions while we were running the mother and baby home.”

The investigative journalist Mike Milotte, who wrote the book Banished Babies, says Sr Hildegarde had admitted that adoptive donations constituted the largest source of income to the abbey. She is described in the book as one of the “three most important people in the Irish adoption picture” and the nuns at Roscrea sent 450 children to America.

Mr Sixsmith estimated that the Hess family in St Louis paid about $2,000 for Michael and Mary at the time, an enormous sum in 1955. Furthermore, when a dying Hess requested to be buried in the grounds of the abbey, the nuns solicited a substantial donation from him.

Shunned
Sr Julie has pointed out that the congregation ran the home on behalf of the State at a time when single mothers were often shunned by their families.

When asked what she would have to say to women such as Lee now, she responded: “We understand that it was a distressing and traumatic experience for them to give up their children for adoption and we feel great sympathy for them.”

Absent from the statement is any expression of sorrow or remorse, according to Mr Sixsmith. “They could just say ‘sorry’. These things were done in a different time, but you would have thought that an apology surely would be the first step in healing all these wounds. Sympathy is not the same as saying sorry.”