Some 700 elderly people receive dinner from Alone on Christmas Day 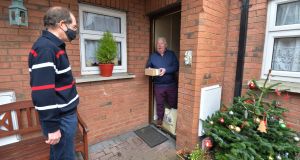 Avid Shamrock Rovers fan Michael McCarthy (71) was among the 700 people who received a dinner from Alone, the charity for older people, on Christmas Day.

Volunteer Michael Lochrin delivered the dinner to Mr McCarthy on Friday morning and said it was “a small thing” the charity could do for older people over the festive period.

“It might be a small thing to you, but it’s a big thing for us,” Mr McCarthy said.

Mr McCarthy, originally from Walkinstown, is a resident of Alone’s housing scheme for elderly people in Kilmainham. He said he would have his Christmas dinner before visits from family later in the day.

“It’s just this year things are a little bit strange, you won’t be going to houses or anything like that. My daughter will come over and my brothers. Then I’ll see my sisters over the weekend. I won’t be alone as such,” he said.

“I couldn’t say enough about Alone though. All these people could be sitting at home in their warm houses now and they’re out and about looking after people. It’s fantastic.

“They gave us some goodies during the week, they’re just angels...They’re here when you want them, they’d be on your door in two minutes if you needed them.”

Mr McCarthy said recent months have been “quite restrictive” and that he misses going to League of Ireland games on Friday nights.

“I’m heavily involved in the sport and we’ve no football to go to. There’s nowhere to really go to. Lucky enough, we’ve some nice walks around here,” he added.

“I’m a big fan of Shamrock Rovers and we would always have our gatherings. It’s a great night out every Friday and you’ve at least 20 matches up in Tallaght for €100 a year. You can’t go wrong.”

Mr Lochrin, who has been a volunteer with Alone for the last three years, spent much of Christmas morning delivering meals with his wife.

“It’s nice, you meet lovely people. It’s a small thing for me to do, it’s as easy as anything and you can see the smiles on their faces. It’s worth it,” he said.

Sean Moynihan, chief executive of Alone, said more than 150 volunteers were delivering Christmas dinners across the country on Friday.

Mr Moynihan said the charity would usually work with 5,000 older people a year, but this had risen to 15,000 people due to the Covid-19 pandemic.

“Since March we’ve had around 40,000 calls, normally we would only get a fraction of that. We also moved the helpline to seven days a week and 12 hours a day,” he said.

“I think the last year has been really mentally hard for young and old. I was talking to an older couple in their 90s the other day and the only other place they’ve been, literally since March, was the supermarket. One of them said to me thank God we had each other but some people don’t have that.”

Janice Culley was amongst a number of volunteers manning the charity’s support line on Christmas Day. She said the line had been busy early on with enquiries about Christmas dinners and also from some of the charity’s regular callers.

2:57 HSE explores option of giving AstraZeneca to some people under 60

Attending Mass a criminal offence under Covid-19 regulations, court hears 16:40
HSE explores option of giving AstraZeneca to some people under 60 16:12
Public warned about ‘sophisticated scam’ aimed at those receiving benefits 16:12
Woman who challenged hotel quarantine rules calls for changes to system 16:09
Man (19) caught with almost €70,000 worth of drugs remanded in custody 16:02