Slavery: Number of victims in Northern Ireland doubles in one year 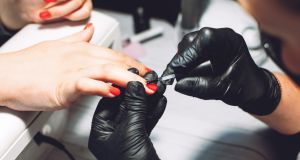 The PSNI said modern slavery can be found in settings such as nail bars. Photograph: iStock

The number of victims of modern slavery identified in Northern Ireland has almost doubled in a year, inspectors have found.

The CJINI has published its first in-depth assessment of how the criminal justice system in the region deals with such activity.

Inspectors found that in 2019, there were 91 potential victims identified in Northern Ireland.

“It may seem like something that doesn’t happen in our community, but it does and it’s happening now.”

They also praised the PSNI’s link-up with the UK-wide National Crime Agency.

However, they said more work was needed to get a grip on the scale of the problem in Northern Ireland.

Ms Durkin said this was particularly the case with child victims.

“Victims of modern slavery and human trafficking are among the most vulnerable and traumatised in the criminal justice system,” she said.

“They are often terrified to speak out and seek help.

“These offences are often described as being ‘hidden in plain sight’.

“They can involve people working on farms, in food production, at car washes, in nail bars, in domestic settings cleaning homes and providing childcare, as well as children who are trafficked across Northern Ireland for sexual exploitation.”

The chief inspector added: “This inspection identified further work was required to better understand the nature and scale of modern slavery and human trafficking and develop a more effective legislative and strategic response.”

Among the findings, inspectors identified a need for a greater strategic focus on pursuing perpetrators of trafficking offences against children.

They said it was also important that frontline police officers understood modern slavery as child abuse and applied the appropriate child-protection referral arrangements.

Ms Durkin added: “Specialist police officers in the Modern Slavery and Human Trafficking Unit and specialist prosecutors worked really well together to tackle modern slavery and human trafficking but there is more to be done.

“It would be beneficial to extend this model to cases involving children who are victims of modern slavery and human trafficking offences.”

He said it was a positive report which “acknowledged that excellent working relationships exist between specialist police officers and specialist prosecutors working in the PPS”.

“We will continue to build on this good work and following the recommendations made as a result of the inspection, we will be developing an action plan to deliver on these,” he said.

“We will also continue to work with other partners, specifically the Department of Justice and the Public Prosecution Service, to help them with any recommendations they are leading on.” – PA