As rents in the capital spiral, renters are struggling to find a decent place to live

Olivia Kelly reports on rising rents in Ireland and how not enough new homes are being built to meet demand. (Figures: June 2015) 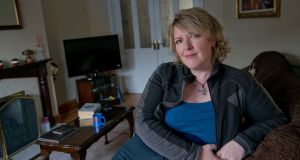 “The older you are, the worse it gets.” Barbara Cottier at her rented accomodation in Lucan, Co Dublin. Photograph: Brenda Fitzsimons

Julia Schlegl got an insight into the rent crisis in Dublin recently when her elderly landlord asked her to find two more tenants to fill her three-bedroom house in Phibsborough.

The house, as Schlegl says, is old and without central heating. It has “a certain charm” but is probably not what most tenants would go for had they the choice.

So when the young mother from Germany posted an online ad in September she wasn’t anticipating a great deal of interest. But, “I’ve had hundreds of emails,” she says. “People were sending me links to their websites, to their jobs pages, and other messages kind of begging me to give them the place. It was a horrible experience. I had no idea how bad the situation was.”

The situation has been getting progressively worse for the past few years. In 2010 Ireland had too many houses, not too few. But with a growing population, demand has increased steadily over the past five years while supply has failed to keep up. The latest statistics from the Private Residential Tenancies Board show house rents across the State in the second three months of 2015 were 6.4 per cent higher than in the same quarter last year while apartment rents were 7.6 per cent higher.

“I could have rented about 50 homes to decent people over the past few weeks,” Schlegl says.

As rent levels continue to return to 2007 levels, some people, especially newer arrivals, have started to search for ways to avoid paying expensive rents.

Rafael, an English-language student, arrived in Dublin from Brazil last April. At 28, he might reasonably have believed his days of sharing a bedroom were behind him but he says rents in the capital left him with no other option.

“I’m sharing a room with two more guys – one from Paris, one Brazilian,” he says. He’s paying €210 a month for a third of a bedroom in Dublin 8. Before that he was paying €300 a month to share a bedroom with three other people in Dublin 7.

Long-term tenants also struggle to find satisfying living arrangements, however. Barbara Cottier has been renting in Dublin for 12 years, first in Crumlin then Cherry Orchard; in the past year she moved out to Lucan.

She says she set up a Facebook page – ‘Non-shared rooms to rent in Dublin’ – after the frustration of trying to find reasonably priced accommodation within walking distance of the city centre.

“You’d see a room on Daft for €400 a month,” she recalls. “You’d be like, ‘Great, that’s €400 a month, it’s in a fairly good location’ – somewhere close enough that you can walk to town if you really need to. And then you discover that you’d be sharing the room with two or three other people.”

Cottier, who is in her 40s, settled for Lucan where she pays €350 a month for a single room, but she says unless someone is willing to pay at least €700 it’s impossible for them to live in the city centre.

She adds that age made things more challenging for her too. “It’s difficult to find a room, let alone one in an area that you want to be in,” she says. “I went to visit rooms before I moved into my last place and I was taking cookies and all sorts to try and get a foot in the door but it makes no difference.

“And of course, the older you get the worse it is, because the majority of people sharing are sort of in their mid-20s and early 30s and they don’t want to be sharing with anybody older than that. It’s incredibly difficult.”

Although most tenants endure the stress of searching for accommodation and eventually find somewhere to live, some attempt to bypass landlords altogether.

Tommy Wolfe, a bicycle courier who lives in a squat on Parnell Street says he gave up on renting a couple of years ago when he couldn’t find a bedsit for less than €600 a month.

Before that, he had lived on Cathal Brugha Street, sharing a two-bedroom flat with his then-girlfriend for €600 between them. Fast forward a few years and he says he knows tenants who are still living in the apartment next door and “their rent has gone up to €1,400”.

Sitting in a makeshift bicycle workshop in what used to be Neary’s Hotel, Wolfe says squatting attracts more people these days. But with a community that numbers in the dozens, it could hardly be said to be popular.

So if some people find the solution to the rental crisis inside a disused guesthouse in Dublin’s north inner city, others might have more luck at the Holy Family Parish Centre in Stoneybatter, where the newly formed Dublin Tenants’ Association meets every Tuesday evening.

A long-term tenant who has been renting for about 20 years, Kenny believes the Irish model is shifting: whereas once renting was a temporary stopgap on the way to full homeownership, many tenants now consider it a more permanent option.

But the problem, she adds, is that tenants here don’t enjoy the same rights as continental renters and, furthermore, are unaware of the rights they do have. “When I was in house shares we would have been given invalid notices of termination and essentially packed our bags and left. We only discovered months later that it was completely illegal,” she says.

She adds that the Dublin Tenants’ Association, at this stage, aims simply to make tenants aware of their rights and provide them with a place to gather and speak about their experiences.

Kenny says that the dearth of accommodation makes tenants reluctant to raise issues with their landlords for fear of a rent increase. “I can’t even think more than three months down the line,” she says. “I have a fulltime permanent job and I am terrified of the next rent increase. I can’t afford it and there is nowhere to go.”

Magnus Hammar, secretary general of the International Union of Tenants, says the establishment of an Irish tenant’s union is overdue.

Tenants’ unions in other European countries wield a lot of power, he says. The Swedish Union of Tenants has 535,000 members; the German one has 1.2 million members. Politically, they have some clout.

It remains to be seen whether the pro-tenant measures spearheaded by Minister for the Environment Alan Kelly will dampen renters’ desire for a lobbying body.