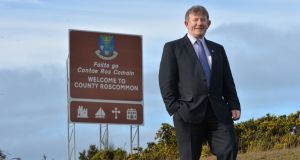 Tony Ward, chairperson of the Save Roscommon campaign, in front of a sign welcoming drivers to Co Roscommon after driving over the bridge on the N4, a crossing point from Westmeath to Roscommon. Photograph: Alan Betson/The Irish Times

Co Roscommon is to remain intact following a controversial boundary review which looked at whether over 30 sq km of the south county should be subsumed into Co Westmeath to accommodate a growing Athlone.

The Athlone Boundary Review committee, set up to investigate the matter, has recommended there be no change to the Roscommon/Westmeath border, but that local authorities in both counties co-operate in joint initiatives where an expanding Athlone is concerned.

Should such this not happen within a four-year period then the committee recommends “that the boundary be extended in order to achieve coherent sustainable development for Athlone.”

The committee made a point of saying it was impressed by the councillors and officials of both Roscommon and Westmeath Co Councils and their willingness to engage in a positive manner for the future of Athlone.

Roscommon/Galway TD and Minister for Communications Denis Naughten told The Irish Times today he was “absolutely delighted” at the committee’s decision.

“ I made it crystal clear from day one that not an inch of Co Roscommon would be moved and that in no circumstances would I support a government which agreed to such a move.

“I made it clear to the Taoiseach before accepting his offer to be a member of the Cabinet - and I’ve been consistent in that since,” he said.

He explained one of the first things he did when he became Minister “was to change eircodes which did not reflect county boundaries.

“People take pride in their county, and that area around Monksland is very important, economically, to Roscommon as whole.”

Overall he was “delighted with the outcome and the recommendation that people co-operate across the Shannon. That should be extended to Roscommon/East Galway, to Roscommon/Westmeath, and Roscommon/Longford, to create a major hub for future investment in the Midlands.”

Their completed report was recently submitted to Minister for Community and Local Government Simon Coveney.

Last year the Department of the Environment recommended that the southern part of Co Roscommon should lose 38sq km to Co Westmeath, as this would make it easier to manage the needs of Athlone. This was strongly supported by Westmeath County Council.

In June 2015, then minister for the environment Alan Kelly set up the review group to look at the border between the counties and make recommendations on the area around Athlone in the context of “effective and convenient local government”.

It was to report at the end of March, but the review group received 27,949 submissions, each of which had to be gone through.

The proposal met with fierce opposition locally in Roscommon, with the county standing to lose more than 10 per cent of its population (7,000 of its 64,065 people), and approximately 7,500 acres of some of the most prosperous land in the county.

The area has been developed by Roscommon County Council over decades, and became a successful location for pharma and food firms, including Alkermes (formerly Elan), Arran, Sidero, Jazz Pharmaceuticals and Carty Meats.

It is also worth €2.5 million a year in rates and taxes to the local authority, which has struggled to maintain its commercial rates base.

Concerns were also raised about effects on two of the county’s most successful GAA clubs – Clann na nGael and St Brigid’s – if some of their hinterland was to disappear into Westmeath.

It organised most of the submissions sent to the review group as well as a social media campaign which drew on support from the county’s widespread diaspora.

Postings opposing any boundary change came from as far away as Paraguay, Abu Dhabi, New York, Australia, and Hollywood, where actor Chris O’Dowd, a Boyle native, posted, “They’re trying to do WHAT?!”, when he heard of the proposed boundary change.