‘Residents are very frightened. We will fight tooth and nail to save their homes and protect them’ 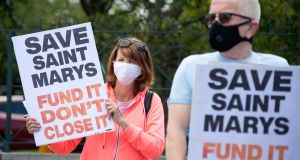 Residents’ families and staff protested on Wednesday at a south Dublin nursing home which is facing closure, calling on the HSE to take it into State ownership.

Failing that they are demanding that management of St Mary’s (Telford) nursing home and disability centre on Merrion Road ensure former staff are paid at least statutory redundancy.

The Sisters of Charity, who founded St Mary’s as a school and “asylum” for blind women and girls in 1868, say they have not been involved in its management since 1996, though two sisters sit on the board.

The Sisters own the land and campus however and say they “have great sympathy for those who find themselves out of a job as well as for the residents.”

Staff were told last month there were insufficient funds to pay statutory redundancy. The Sisters said on Wednesday, however: “Separate and distinct from the redundancy payment, if possible, the congregation want to make some ex-gratia / voluntary payment to impacted employees in recognition of their dedicated service to the residents of the home”.

Liquidators Baker Tilly were appointed by the High Court last month to oversee the closure and wind-down of St Mary’s. On August 17th, however, Mr Justice Garrett Simons adjourned the liquidation for three weeks to allow legal counsel for remaining residents to meet and prepare affidavits.

The court heard the residents, all elderly women and some visually impaired, were “particularly vulnerable”.

The home has been the subject of critical inspection reports from the healthcare watchdog, the Health Information and Quality Authority (Hiqa), in recent years.

Reports published in 2017 and 2019 criticised governance and management of the centre though commended the quality of care provided.

Among those at the protest on Wednesday, which was supported by unions Unite and Forsa, were chefs Robert Dowling who had worked in the home’s kitchen for 15 years and Jimmy Walsh, who worked here for six years.

“The first we heard the place was closing was in the newspaper,” said Mr Dowling. “The managers said we weren’t viable, which is untrue in my opinion. We’re fighting for what we’re due. We’ve been treated terribly, just cast aside.”

Mr Walsh said St Mary’s had been a “good place” to work. “But this; we’ve been treated absolutely disgracefully”.

Joe Brabazon, whose wife Kay (81) had been in St Mary’s since last year until three weeks ago (he had to find her a new nursing home), was at the protest “to back the staff”.

Trish Healy, whose mother Kay Martin (77) had been in St Mary’s for three years, said her mother was “very, very upset” at having had to move. “It has had a major impact on her. She’s not eating properly. She’s not drinking.”

“What they are doing to residents and staff here is grossly unfair. I am very upset about it.”

Ann Ryan, co-ordinator of the Save St Mary’s campaign, said the liquidation of “a very valuable service” was “a disgrace to our State”. She said she had spoken to residents. “They are very frightened. We will fight tooth and nail to save their homes and protect them”.

Baker Tilly said it could not comment as the liquidation had yet to be confirmed by the High Court.