‘Repeal the 8th’ mural removed in Dublin under protest

A 'Repeal the 8th' mural by Irish artist Maser is removed from the front wall of the Project Arts Centre in Dublin's Temple Bar. The Project was told by the Charities Regulator that the mural was "political activity" and therefore in breach of the Charities Act 2009. 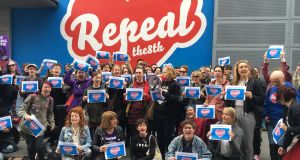 A mural urging repeal of the Eighth Amendment in the upcoming referendum has been painted over after authorities demanded that it be removed.

Dublin’s Project Arts Centre, which is a registered charity, was told by the Charities Regulator to remove the mural by Irish street artist Maser because it was deemed to constitute “political activity”.

Before he covered up the mural with blue paint, Cian O’Brien, artistic director of the Project Arts Centre, said the decision had not been taken lightly.

“I am calling this action today defiant compliance. Restrictive legislation has intervened in a creative institution and in order to protect the future of that institution and all the artists who work here now and may work here in the future, we have decided to comply with the order of the charities regulator,” he said.

Mr O’Brien said that throughout its 52-year history the centre had always placed itself at the centre of social and political issues through the art it had presented, produced and displayed.

“Through its access this political artwork lives on in the thousands of people who have taken its heart into theirs. You can paint over a mural but you can’t paint over an issue.”

The work had featured a red heart on a blue background, with “Repeal the 8th” written across it, referring to the vote on May 25th when citizens will be asked to decide whether to retain or repeal the Eighth Amendment to the Constitution which governs Ireland abortion laws.

In a statement last Friday, the Project said it had been told by the Charities Regulator that the mural put it in breach of the 2009 Charities Act as it was political.

“The Charities Regulator has informed Project Arts Centre that the display of Maser’s ‘Repeal the 8th’ artwork is ‘political activity’ and that Project is therefore in breach of the Charities Act 2009 and not in line with Project’s ‘charitable purpose’. Should the artwork not be removed, Project risks losing its charitable status,” the statement said.

“Project Arts Centre respects the authority of the Charities Regulator and will comply with their order to remove Maser’s artwork.”

A spokesman for the Charities Regulator confirmed it had written to the centre on April 12th “reminding” the board of its obligations under the Act.

“The office is not taking sides in any debate, but it is important charities remember that though they can engage in activities to promote a political activity, this must relate directly to the advancement of its charitable purpose. This is to protect donors to charities, and also the charities themselves.”

The regulator also noted that there are “registered charities currently campaigning on both sides of the referendum debate, which are doing so in compliance with their obligations under the Charities Act 2009 because they are advancing a political cause which directly relates to their charitable purpose.”