Why the Catholic right wants ‘cleanout’ in Maynooth

Teachings, rather than any ‘strange goings-on’, are main source of contention 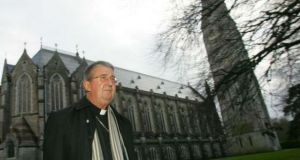 Many have been intrigued, if not confused, by the enthusiasm with which some noted traditional Catholics rushed to support Archbishop of Dublin Diarmuid Martin’s recent observations about “strange goings-on” at St Patrick’s College in Maynooth.

He would not normally be seen as a poster boy for publications such as the Catholic Voice and Irish Catholic newspapers or with the Iona Institute.

However, his comment on the seminary seeming “like a quarrelsome place” which he did not think “was a good place for students” was music to the ears of many on the Catholic right. As was his decision to send Dublin seminarians to the Irish College in Rome.

But while the right too would be concerned at what he described as anonymous allegations of misconduct, their primary interest is with theological formation.

Dr Martin has not criticised this and was positive in his comments on the seminary in this regard this week.

Catholic Voice editor Anthony Murphy told The Irish Times he was encouraged by Dr Martin’s decision to send Dublin seminarians to the Irish College in Rome.

He believed it “extremely damaging” that “the other bishops are circling the wagons to protect themselves and their power”. What was needed, he said, was “a complete cleanout” at Maynooth.

“The situation with vocations in Ireland is dreadful, perhaps the worst in Europe. France Spain, England, are all doing better . . . The bishops should be hanging their heads in shame.”

He said, for instance, that if all seminarians at Maynooth “were wearing clerical garb it would be very difficult for them to appear on Grindr”. Priests, he believes should always wear clerical attire as “a witness for Christ in the world”.

Mr Murphy recalled how in May of last year, out of a class of 10 seminarians it was recommend that six take time out from formation as they were deemed “theologically rigid”. Three were later readmitted following intervention by their bishops.

This downplayed the solemnity of the Blessed Sacrament, he claimed, and said there had been “outright denials of the Real Presence of Our Lord in the Eucharist, a questioning of the divinity of Jesus Christ [by suggesting that Christ might have sinned], and the notion that salvation is merely ‘living well’”.

Transubstantiation, whereby Catholics believe bread and wine become the body and blood of Christ, was “being downplayed as a bloodless sacrifice and becoming more a memorial meal, a common supper,” he said.

Sincere Catholics “cannot but be outraged by the controversy surrounding Maynooth”, he said, “that men are being formed for the Catholic priesthood in such an environment.”

Seminarians deserved better; “they deserve a Catholic formation which is in full agreement with the mind of the Roman Catholic Church, ” Mr Murphy said.

He also said “the faithful have been dismayed to learn that one of the key figures in Maynooth who strove to cultivate a strong masculine and priestly identity suddenly resigned in June.

It is widely believed that priests such as Fr Flannery, Fr Brian D’Arcy, Fr Gerard Moloney, Fr Owen O’Sullivan, the late Fr Seán Fagan and other priests were disciplined by Rome due to the active intervention with the Vatican by some on the Catholic right in Ireland and senior clergy combining to act as a kind of thought police.

It explains the trenchant statement this week from the ACP in support of Maynooth. It was clear, it said, that “the anti-Maynooth issue is being driven by a number of agendas: conservative commentators, particularly in ‘Catholic’ newspapers who consistently criticise Maynooth for not facilitating the concerns of very traditional candidates, notably their interest in Latin Masses and traditional clerical dress.”

Included also were “former students who were deemed unsuitable for priesthood by the seminary authorities but who remain convinced that they should have been allowed to continue . . .” and “right-wing commentators who are unhappy with the focus on the theology of the Second Vatican Council and suspicious of modern psychological and other insights; and writers of blogs that consistently attack the Catholic Church”.