Reference to blasphemy in the Constitution is largely obsolete, say all Churches 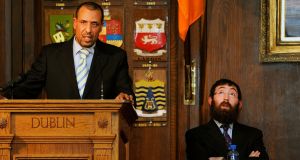 Four years ago an alliance of religious groups in Ireland made a submission to the Constitutional Convention in which they said “the current reference to blasphemy in the Constitution of Ireland is largely obsolete”.

Asked about the issue following the latest controversy over the State’s blasphemy laws involving comedian Stephen Fry’s statements on the RTÉ programme The Meaning of Life, the groups referred back to the 2013 submission, which was endorsed by 14 churches.

In it, they note that the removal of the blasphemy law might “give rise to concern because of the way such measures have been used to justify violence and oppression against minorities in other parts of the world”.

Guarantees for religious freedom might “be better achieved through established or new constitutional and legislative provisions for the protection of freedom of religion, belief and expression, as well as legislation against discrimination and hate crimes,” they said.

Nick Park of Evanagelical Alliance Ireland said: “Christians who get upset about others blaspheming their God are missing the entire point of the Christian gospel. The Bible tells us that the very reason why Jesus came to earth was to be blasphemed.”

He felt that “Those who truly believe in God should realise that He is big enough to look after Himself without needing any assistance from the gardaí.”

Rabbi Zalman Lent of the Irish Jewish community said “it has always been part of Jewish tradition to question God, and to try to understand why indeed bad things happen to the good and innocent”.

He recalled how “after the Holocaust there is even a story of rabbis who convened a makeshift court in Auschwitz to put God on trial, and found him guilty!”

He said it was a matter for the people to decide if blasphemy laws are removed from the Constitution but “from a Jewish community perspective it would be important that speech which incites hatred is unlawful, and effectively policed”.

Dr Ali Selim, of the Islamic Cultural Centre of Ireland, said hate language should be criminal in Ireland. “We don’t have a hate crime, we have incitement to hatred,” he said.

He believed the current comparatively satisfactory situation in Ireland in terms of religious tolerance had “not come out of the blue”. It was “the result of strong efforts by State and faith leaders as well as the power of law”.