Tributes paid to former director of National Museum of Ireland 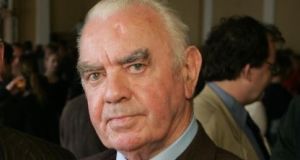 Tributes have been paid to former National Museum of Ireland director Breandán Ó Ríordáin whose funeral will take place on Sunday.

Mr Ó Ríordáin died at Naas Hospital earlier this week, aged 90, and is survived by his wife Éilish and children Macdará, Fiachra, Mary and Aoife.

The National Museum said his death was a huge loss to both the institution and the wider archaeological community.

“Breandán was passionate and dedicated in his field of work, and this informed his leadership at the ¨museum when he served as director from 1979 to 1988,” it said in a statement on Friday.

“He will be fondly remembered by colleagues and former colleagues.”

A native of Galway and graduate of UCG, Mr Ó Ríordáin originally joined the museum as an assistant keeper in the Irish antiquities division.

The museum said he subsequently “shot to national and international fame” as the pioneer excavator of Viking and Medieval Dublin between 1962 and 1979.

He was a widely published author on the Dublin excavations and also on Bronze Age burials, it noted.