Rectors reject portrayal of Protestantism as ‘watered down Catholicism’ 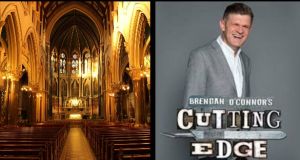 The Cutting Edge programme was said to include “patronising, ill informed, ignorant and insensitive comments” which should have been challenged by host Brendan O’Connor.

Two Church of Ireland women priests have taken strong exception to a portrayal of the church as “watered down Catholicism” on Wednesday night’s RTÉ One Cutting Edge programme.

Rev Gillian Wharton, rector of Booterstown and Mount Merrion in Dublin, felt the description was offensive both to Roman Catholics and members of the Church of Ireland. The programme, she said, included “patronising, ill informed, ignorant and insensitive comments” which should have been challenged by host Brendan O’Connor. He “failed on a number of occasions last night to do so”, she said.

Clergy and laity to whom she had had been upset by the programme, she said

Rev Ruth Elmes, rector of Tinahely and Carnew in Co Wicklow, said she believed “the very politeness of the Church of Ireland” allowed “attitudes like those expressed on the Cutting Edge programme on RTÉ last night, prosper”.

While she preferred the quiet life, “sometimes the worm has to turn and the mouse has to roar”.

She recalled that the programme included Brendan O’Connor, with panellists Rory O’Neill, Sarah Carey and Ciara Kelly. Rory O’Neill, she said, “in reference to his childhood rejection of the Roman Catholic Church on a visit to Knock, says ‘I didn’t become an atheist that day but I took the first step and became a Protestant’.”

Ciara Kelly said “she had four children, two baptised Roman Catholic and two baptised Protestant. ‘Are you going after the cheap fees in a nice Protestant school?’, asked Sarah Carey, to a round of applause.”

Rev Elmes recalled how Brendan O’Connor said, “so you reject the Catholic Church but let them be Protestants because that’s not really a religion?” To which Ciara Kelly responded, “I think most Irish people today are bloody Protestants, cos they watered down Catholicism and dropped the bits that they don’t like.”

“So that’s what Protestantism is? Watered down Catholicism?” asked Brendan O’Connor.” Ciara Kelly responded, “Yes! It really is!”

And the discussion moved on, Rev Elmes recalled.

She felt this false portrayal of Protestantism was because it was “often open minded, liberal and forward thinking. It is (at its best), welcoming and inclusive, generous . . . This can often be misinterpreted as woolly and beige, not having any real rules or religious convictions.”

Protestantism sought “for those who proclaim they are part of it, to debate and engage with their own conscience – often a more difficult journey than buying into any belief system that accepts teachings without filtering and struggling with the issues personally”, she said.

She asked “why would I wish to be involved in an organisation which has ordained women, has a policy of welcoming all to receive Holy Communion (if their conscience permits), allowed for the remarriage of divorced persons and in some quarters championed the pro-marriage equality debate?