Let us not confuse the act of avoiding pregnancy with abortion, says Argentinian pope 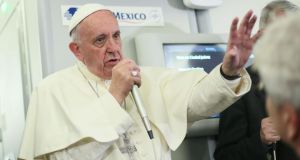 Pope Francis on Thursday night appeared to suggest that women threatened with the Zika virus could use artificial contraception. The pope made his remarks in answer to a question during his now-traditional airborne press conference on the papal plane on the way back to Rome at the end of his week-long visit to Mexico.

It was pointed out to the pope that, in light of concern about the Zika virus being contracted by pregnant women, “some authorities” had recommended abortion and contraception. Could the Catholic Church see this as “the lesser of two evils”?

“Abortion is not the lesser of two evils,” said the Pope. “It is a crime. It is to kill someone in order to save another. This is what the Mafia does. Regarding the lesser evil, avoiding pregnancy involves a conflict between the fifth and sixth commandments.

“The great Paul VI, in a difficult situation in Africa, permitted nuns to use contraceptives in cases of rape. But let us not confuse the act of avoiding pregnancy with abortion. Abortion is not a theological problem, it is a human problem, it is a medical problem.

“Avoiding pregnancy, on the other hand, is not an absolute evil and, in certain cases, as in the one I mentioned, involving the Blessed Paul VI, this is clear. I would also urge doctors to do their utmost to find vaccines against the mosquitoes that carry this disease.”

Researchers say pregnant women are especially at risk, noting that the virus may be responsible for a spike in cases of microcephaly, a condition in which newborns have unusually small heads and brains. The virus has been reported in at least 34 countries, many of them in Central and Latin America.

In the past, Pope Francis has tended to downplay obsessive moralising over sexual ethics.

Asked about the use of condoms in the fight against Aids last year on his way back from Africa, he said that Africa had far more urgent problems, such as poverty and exploitation.

His mention of Pope Paul VI presumably refers to a decision made by that pope to allow nuns in the Belgian Congo to use contraceptive pills at a time when Catholic nuns were being systematically raped. Little is known about that exceptional dispensation, which was not publicised at the time.

A senior Holy See figure told The Irish Times last night it would be mistaken to interpret the pope’s remarks as a major change in Catholic Church teaching, saying: “The Church is not changing its teaching but it is showing some understanding for an exceptional and difficult situation.”