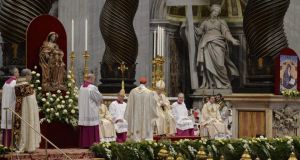 Pope Francis leads a mass for Armenian Catholics marking 100 years since the mass killings of Armenians under the Ottoman Empire. Photograph: AFP

Pope Francis has commemorated the 100th anniversary of the massacre of as many as 1.5 million Armenians as “the first genocide of the 20th century”, words that could draw an angry reaction from Turkey.

Muslim Turkey accepts many Christian Armenians died in partisan fighting beginning in 1915, but it denies that hundreds of thousands were killed and that this amounted to “genocide”.

During a Mass in St Peter’s Basilica, Francis recalled the “senseless slaughter” of a century ago.

“It is necessary, and indeed a duty, to honour their memory, for whenever memory fades, it means that evil allows wounds to fester.

“Concealing or denying evil is like allowing a wound to keep bleeding without bandaging it!”

Turkey later summoned the Vatican’s ambassador in Ankara over the pope’s comments.

Some Western historians and foreign parliaments refer to the mass killings of Armenians a century ago as genocide.

But the United States and other allies of Turkey refrain from using the word so as not to sour relations with Ankara, an important strategic partner in the Middle East.