Number of Masses to be reduced in Border diocese 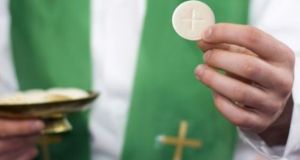 The number of Masses in the Catholic diocese of Clogher will fall to 96 from next month. Photograph: iStock

The Catholic diocese of Clogher has announced it is to reduce the number of Masses by 15 per cent from next month due to the age and shortage of priests.

The diocese, which has a Catholic population of 88,000, covers most of Monaghan and Fermanagh, with parishes in Tyrone, Donegal, Louth and Cavan.

The changes were announced by the Diocesan Administrator Msgr Joseph McGuinness, who noted that the diocese has just 58 priests active in parish ministry, 28 of whom are over 65.

In a pastoral letter entitled The Future Mission of Our Parishes, Msgr McGuinness said Clogher has just 44 priests aged under 75 and that they were ministering to communities in 85 churches across 37 parishes.

The changes follow a series of meetings over recent weeks involving priests of the diocese and chaired by Msgr McGuinness, who was was appointed in 2016 following the resignation of Bishop of Clogher Liam McDaid due to poor health.

They will mean a reduction in Masses across the diocese from 113 at present to 96 next month, Msgr McGuinness said.

It was “the beginning of the task of addressing the spiritual and pastoral needs of all in our diocese in what is now a very changed landscape,” he said.

“Many parishes will see Masses being rotated between two or even three churches at weekends. In some cases, churches will only have Mass on designated Sundays of each month,” Msgr McGuinness said.

This reduction was to allow for the reduced number of priests to celebrate several Masses on a weekend across parish boundaries in each pastoral area and to provide people with a range of options for attending Mass, he said.

Further, there will be no additional funeral Masses on Sundays. Funerals will be marked at one of the regular Sunday Masses and families unhappy with this can have the funeral Mass on the Saturday or on the Monday.

From next month also, a Mass on any weekday or weekend can be offered up for several intentions at once, including month’s minds, anniversaries, or funerals.

In such instances, however, the priest may only accept one offering for himself for any one Mass, in accordance with Canon Law. Other offerings or stipends will be used to contribute to the work of the church.

The changes will also mean having priests from neighbouring parishes coming in on a regular basis to preside at the Sunday Eucharist in each other’s parishes.

“Obviously, further changes will become necessary in the period ahead as parishes and pastoral areas continue to review local circumstances,” Msgr McGuinness said, insisting “there is no question of any church being closed”.

There was, he said, a clear recognition of the importance of each church to its local community.

“I know and understand that not everyone will be happy with every aspect of these changes. However, I am confident that the people of the diocese as a whole will give them a chance,” he said.

There was, he said, “still much to be done, especially by lay men and women, in renewing parish life and the mission of the church into the future. In this way, we can work towards a balancing of the roles of clergy and laity in our church, where all work in partnership together”.