Ministry of priests disciplined by Vatican to be discussed 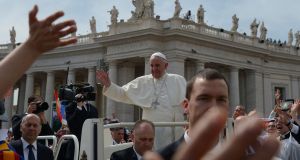 Pope Francis at St Peter’s Square in the Vatican last month. Restoration to full ministry of priests disciplined by the Vatican will be discussed at a planned meeting between Catholic bishops and the Association of Catholic Priests. File photograph: Vincenzo Pinto/AFP/Getty Images

Restoration to full ministry of priests disciplined by the Vatican will be one of the main topics to be discussed at a planned meeting between the Catholic bishops and the Association of Catholic Priests (ACP).

Other matters to be discussed will be the “grave disquiet” felt by priests at how bishops are currently being appointed, and a streamlining of guidelines on clergy returning to ministry.

Resolutions on these matters were passed at the agm of the ACP last November and were later outlined in a letter to the bishops on December 1st last.

“In order to discuss matters of mutual interest, the bishops have recommended that a group comprising the bishops from the Council for Clergy (Bishops Browne, Boyce and Nulty) along with Archbishop Kieran O’Reilly, meet with representatives of the Association of Catholic Priests.

“It is envisaged that the meeting would take place some time in the near future. I will be in contact again to arrange a date.”

Four years ago this month it emerged that Redemptorist priest Fr Tony Flannery had been suspended from ministry by the Vatican for his perceived liberal views on priesthood, women’s ordination and church teaching on sexuality.

Subsequently it emerged that others Irish priests such as Fr Brian D’Arcy, Fr Gerard Moloney, Fr Sean Fagan and Fr Owen O’Sullivan had been censured by the Vatican for their perceived liberal views.

At its meeting last November, the ACP passed a resolution requesting that “during the Year of Mercy the Superiors of Religious Congregations and the Irish Bishops’ Conference approach the Vatican authorities with a view to restoring to full ministry those Irish priests who have been disciplined for alleged unorthodox views. We believe that this would be very much in the spirit of the Year of Mercy as outlined by Pope Francis. ”

Last month it was reported that Bishop of Derry Donal McKeown, when asked about Fr Flannery and the other Irish priests, said: “We have to be constantly reaching out - that is the job of followers of Christ.”

He also referred to Pope Francis’s comments that the church must be seen to be building bridges rather than building walls.

Fr Flannery said he was pleased at Bishop McKeown’s comments.