Almost 1,300 asylum seekers have been granted permission to work since June 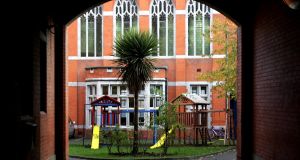 Hatch Hall direct provision centre in Dublin. A resident, who prefers not to give his name, says his applications for jobs in IT have been turned down by four recruiters. Photograph: Eric Luke

Some asylum seekers eligible to work under the State’s recently introduced scheme say they are being blocked from getting jobs by employers who doubt the authenticity of their documentation.

However, asylum seekers have raised concerns that some employers do not understand the new system and refuse to recognise the documentation issued by the Department of Justice. Many employers are also reluctant to hire employees who must renew their application for work every six months.

Asylum seekers also face the obstacle of setting up a bank account as most do not have access to their passport and are not entitled to apply for a driving licence.

A resident from the Hatch Hall direct provision centre in Dublin, who prefers not to give his name, says his applications for jobs in IT have been turned down by four recruiters who told him they could not find employment for non-EU jobseekers without an established work visa. He says the access to work scheme needs to be included under the Stamp 4 visa so that employers feel comfortable hiring asylum seekers.

“Employers automatically understand if someone has a Stamp 1 or Stamp 4 but anything else is difficult for them. One recruiter said the problem with your right to work is it’s confusing. The moment you say I’m an asylum seeker people shy away.”

The Hatch Hall resident says he has attended briefing sessions on the new scheme but that they are never attended by potential employers, only campaigners and NGOs. “We need the corporate world to understand there is nothing to fear in hiring a person going through the asylum process.”

Hicham Lamchaali, who was granted permission to work in July, recently secured work as a receptionist. However, he has only been offered one shift per week and found the job through a personal contact. He says most employers refuse to hire applicants without an Irish residence permit and that many know nothing about the Irish asylum system. “People want to work; we didn’t come to Ireland for social welfare,” he said. Now we’re trying to work but you’re making it even harder for us.”

A Department of Justice spokesman said employer groups were invited to attend an information session in June hosted by the Irish Naturalisation and Immigration Service (INIS). He said full details of the scheme are publicly available on the INIS website and that labour market access permission letters are valid when presented alongside an in-date temporary residence certificate (TRC).

Asked to comment on employers requesting to see a residence permit, which asylum seekers do not hold, the spokesman said the permission letter and TRC card contain a photo of the applicant as well as their personal ID number which can be crosschecked. The permission letter also contains a watermark and employers can contact the INIS labour market access unit if they have any queries, he added.

The establishment of a website or information portal where employers could check the authenticity of an applicant’s permission would contravene section 26 of the International Protection Act and the obligation to protect the identity of international protection applicants, said the department spokesman.