Meeting comes amid tensions between priests and bishops’ conference 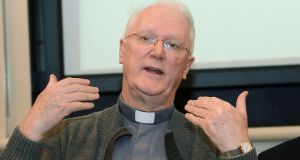 Representatives of the Catholic bishops will today meet members of the Association of Catholic Priests (ACP) following a two-year gap.

The meeting comes amid growing concerns over the impact of falling vocations on the priesthood and continuing tensions between the priests’ organisation and the Irish Episcopal Conference.

Following the last meeting between the two bodies in 2014, Fr Brendan Hoban of the ACP delegation expressed frustration at the bishops’ response.

“We knew we were pressing buttons that the bishops would prefer we left untouched,” he said.

“We talked to them about the crisis in vocations. We quoted statistics from their own website. We explained in graphic terms that in 10 to 15 to 20 years time Irish priests – apart from a tiny cadre of aged individuals – would have virtually disappeared.”

The ACP had proposed three strategies to the bishops: (i) ordain married men “of proven responsibility and virtue”; (ii) invite priests who “left the priesthood” to get married, to return to ministry; and (iii) extend to women ordination to the permanent diaconate.

A permanent deacon in the Catholic Church can perform most of the duties of a priest.

The organisation had hoped to persuade the bishops to take up these matters with the Vatican.

More than two-thirds are over 55 with an average age now approaching 65. Most retire, or used to, at 75.

Fr Hoban said that, according to studies, “Ireland’s priests will have almost disappeared in 20 years”.

A new survey of Irish priests by final-year University of Limerick journalism student Conor Tivnan found that 42 per cent said celibacy should be dropped to combat this decline.

Just 37 per cent supported the ordination of women. The survey was conducted among a random sample of 60 priests in the 26 Catholic dioceses.

On the decline in priest numbers, the church’s national vocations co-ordinator, Fr William Purcell, said “the problem is that we don’t have full-time vocations directors in dioceses”.

He dismissed the ACP proposals for addressing the crisis as “reactionary” and “an agenda for the Vatican”.

The ACP is seeking reform in other areas, including the introduction of “a single set of policies and guidelines in enabling clergy to return to ministry”.

A resolution at its annual meeting also sought to change the way bishops were appointed.

The resolution, which was overwhelmingly passed, expressed “grave disquiet” at how this is being done and criticised the lack of any credible consultation, the preference for candidates of a particular mindset, the appointment of outsiders to dioceses, and “the choice of candidates who seem to be out of sync with the realities of life in Ireland today and uncomfortable with the openness of Pope Francis to change and reform the church”.

It is hard enough for a priest to be responsible for three parishes but when those parishes are spread across three islands it poses unique challenges, as Fr Maírtín Ó Conaire testifies.

He arrived on Inis Mór, the largest of the three Aran Islands, in July 2014, having previously served as a curate in Tuam, Co Galway.

The relentless severe storms of the past winter wreaked havoc on his journeys to the other two islands to celebrate Mass.

“There are some Sundays when you simply can’t get out to the islands . . . due to the dangerous conditions,” he says.

Fr Ó Conaire’s day begins with Mass in the morning in one of the three churches on Inis Mór.

He spends the afternoon doing office work, then visits elderly people and schools – of which there are two primary and one secondary.

He celebrates Mass in the evening, and fits in ceremonies – funerals, christenings and weddings (which are especially popular on Inis Mór) – at weekends.

Keeping the community spirit is very important: “Islands by their nature and the people who live on the Aran Islands are very independent.

“I may be the only priest here, which is difficult at times, but it is the people who look after the church. At the end of the day, being a priest here has its pros and cons, but I don’t find it restrictive.”

Asked whether there is a case for changing the rules on celibacy, or to allow married priests, he replies: “Everybody at some point in their lives, experiences loneliness. A lot of priests at the moment are struggling with their faith.

“The issue surrounding celibacy should at least be discussed, but I think that connecting that to things like loneliness and increasing vocations is not a good idea.”

On the ordination of women as priests, Fr Ó Conaire says: “To do it for the increase in the number of priests would be completely wrong.

“A lot of the ministry work done by nuns goes unnoticed. It doesn’t get the same attention and praise that we as priests do.”